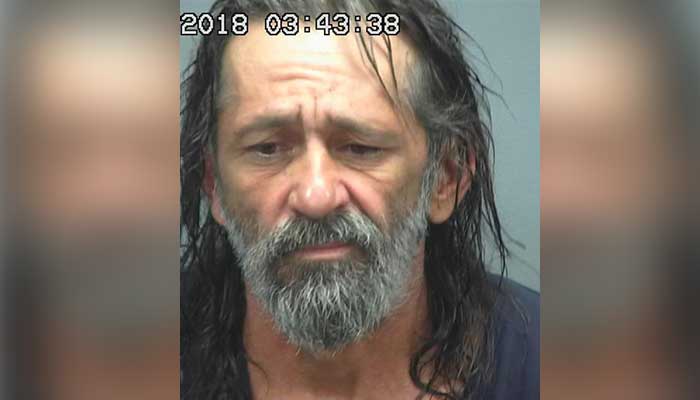 Safford – Graham County Sheriff’s Deputies were dispatched to Jobi’s Market on Highway 191 at about 4:30 Saturday afternoon in regard to a possible hit and run. When officers arrived they found the alleged victim but the vehicle was no longer on the scene.

According to witnesses, an older model white and grey Chevy or GMC pickup truck had pulled into the parking lot at a high rate of speed, stopped at one of the gas pumps, and got into a verbal altercation with another man at the pump. The pickup, driven by Travis Hancock, then pulled away and the other man walked around to the tailgate of his vehicle and pulled out two objects that witnesses initially believed to be a can of pepper spray and a pipe wrench. The man yelled something at Hancock, who abruptly made a U-turn and came back toward the victim, running him over. One witness reported that the truck, driven by Hancock, struck the victim head-on, hitting his waist area, causing him to roll off the hood area. The man stated that he believed the truck tires may have run over the victim’s legs. A later viewing of the store’s security camera footage showed that the victim’s right leg had been run over by the truck.

The victim had apparently contacted a woman, Daryian McKay, to pick up his vehicle. When police spoke to McKay (who was in the vehicle with another woman) they discovered that she had a warrant out for her arrest. After taking McKay into custody, authorities collected the items the man had been carrying at the time he was struck. Authorities confirmed that the man had a can of pepper spray and an expandable baton. A pocket knife was also found on the ground, which the victim said was clipped onto his pocket when he was struck. After receiving permission from the victim at the hospital the victim’s car was released to other woman who had arrived with McKay.

While the investigation at Jobi’s continued, a deputy observed a vehicle matching the description of the suspect’s truck driving north bound on Highway 191 at a high rate of speed. The deputy advised other units in the area of the vehicle’s location and direction of travel. Another deputy advised that he had the truck pulled over at Morris Lane and Highway 191. The driver of the vehicle had identified himself as Travis Hancock. The deputy who had conducted the traffic stop confirmed that Hancock had an outstanding warrant and stated that he believed Hancock was impaired by alcohol.

After being placed under arrest, Hancock agreed to answer questions about the alleged incident at Jobi’s. When asked what happened, Hancock simply replied that nothing had happened. When advised that authorities had seen video footage of Hancock running over the victim, Hancock stated that he had not run over the victim. According to the police report, Hancock told authorities that he had gone to Jobi’s to get gas and the victim was there. Hancock claimed that he went to confronted the victim (for reasons unknown), and that the victim had held a baton and black air horn in his face and threatened to shoot him. Hancock stated that he was going to drive away but the victim blocked his way by jumping onto the front of his truck. Hancock said that he accelerated to move the victim out of the way. When asked why he was seen making a U-turn before hitting the victim, Hancock said that he needed to turn around so he could go home.

Deputies interviewed the victim at the hospital. He told authorities that he and Hancock had had a falling out and that Hancock had accused him of being a thief. He stated that Hancock had pulled up to the gas pump and threatened to beat him up. The victim said that he reached into his truck and grabbed police-style baton and a can of pepper spray. He then walked around to the back of his truck to take a defensive position against Hancock. He told authorities that he thought Hancock was going to drive away, but then watched Hancock’s truck turn around and subsequently hit him. Deputies took possession of the victim’s clothes in case they contained paint transfer from Hancock’s truck.

While being transported to the jail, Hancock allegedly told deputies that he would shoot them if he had a gun. Hancock was placed into a holding pod at the jail. According to the police report he was acting violently, smashing his head and kicking the door. Hancock eventually calmed down and consented to a blood draw. While conducting blood draw for toxicology, Hancock allegedly accused the victim the hit-and-run incident of being a pedophile and said he was glad he got the chance to ‘smash him’ with a truck. Hancock allegedly said the victim deserved exactly what he got. He further claimed that the victim had threatened him with a gun during an earlier altercation at Jobi’s.

Although the victim admitted that he kept a gun in his vehicle, he denied threatening Hancock and said that he had only been at Jobi’s one time that day – the time of the incident.

Hancock was booked into the Graham County jail for aggravated assault, an outstanding warrant from Thatcher Municipal Court and DUI. The victim was discharged from the hospital later in the evening and reportedly did not suffer any broken bones.