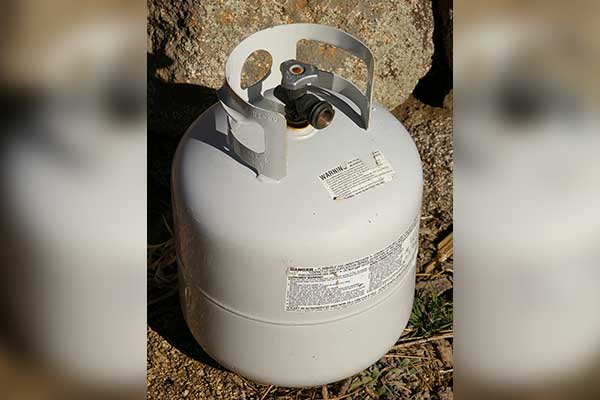 SAFFORD – Police responded to the area of 11th Street and 1st Avenue in Safford last Friday at approximately 11:00 PM in regard to the theft of a propane tank. Dispatch advised the responding officers that witnesses described a male subject, wearing an army style coat and hat with his face covered and a female subject with reddish brown hair.

The reporting party told authorities she was outside smoking when she saw the man and woman walking down the street and witnessed them enter the backyard of a neighbor and steal their BBQ propane tank. She alerted the neighbor who came out and followed the alleged thieves and saw them discard the propane tank in the 1100 block of 3rd Avenue.

Police found the couple in the parking lot of an apartment complex. The male suspect told police that they were just out looking for his dog. An officer asked the male suspect where the propane tank was and he replied, “what propane tank?” He denied knowing anything about the stolen tank. The man stated several more times that they were just looking for his dog. The officer told the couple that they were chased into the apartment complex by the victim and that there were people who could identify them.

Once the witnesses made a positive identification of the suspects, the male suspect was placed in handcuffs. Authorities asked the woman what had happened. She reportedly refused to comment on the situation other than to say that she was ‘basically’ homeless and that the male suspect was the only person willing to help her out.

Police told the male suspect that several witnesses saw him take the propane tank. The man denied the accusation and said, “looking for my dog is a crime?”

An officer responded, “No, but taking a propane tank is a crime.”

The man then said, “What the (expletive) do I need a propane tank for, my wife’s a nurse.”

After speaking with the male suspect, an officer again spoke with the female suspect. He told the woman that he was baffled as to how they could get caught and still deny everything. The woman responded that no one wants to get into trouble. When the officer repeated that he was baffled by the situation, she said, “I’m not denying or confirming it.”

At that point the woman was released and police called the male suspect’s wife at his request and told her that her husband had been arrested and that their dog was missing. The man’s wife asked the officer to tell her husband that the dog was home.

Officers told the male suspect that he was under arrest and would be charged with burglary and theft. He could either be charged with either a misdemeanor or a felony. They told him that since the crime involved a victim that the victim had the choice of charges. He could tell the victims that the suspect was cooperative, in which case they may be willing to charge him with a misdemeanor instead of a felony. The man replied that he did not want to be charged with a felony and finally admitted that he took the propane tank off the grill. He said that he took it to provide some heat for the homeless woman who had been with him.

Authorities talked to the victims and explained the conversation with the suspect and asked what charges they preferred. They said they wanted the suspect to be prosecuted for felony burglary. The man was booked into the Graham County Jail without incident.