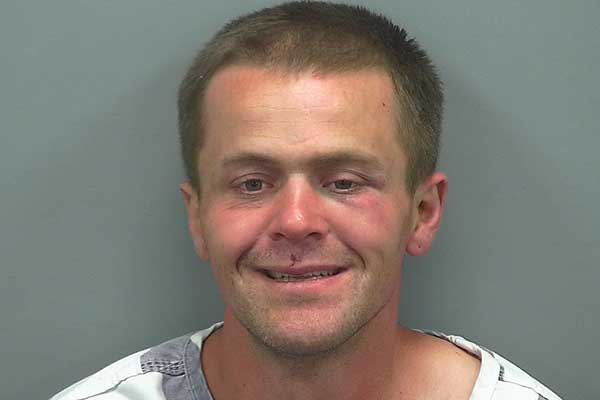 SAFFORD – On Sunday, just before 8:00 pm, an officer was dispatched to the area of Apricot Loop and 12th Avenue due to the report of suspicious activity. A man wearing dark clothing and a back pack was reportedly walking into residential yards in the area. In the past, similar observed activities have resulted in burglaries and home invasions.

The officer patrolled through Apricot Loop and on towards 12th Avenue and 29th Place where a man matching the description was found walking into an apartment parking lot. The officer asked to speak with the man who was later identified as Cody Goodman. Throughout the conversation, Goodman said that he had not entered anyone’s yard and didn’t have any weapons or anything illegal, he only had a flashlight. When Goodman removed the flashlight from his pants pocket, the officer noticed a second object. When asked what the object was, Goodman apparently told the officer there was no other object. However, he continued to place his hands in his pockets even after being instructed several times not to do so. The officer asked Goodman to removed the object from his pocket, but Goodman removed the flashlight again and reported that the other object was a pen. The officer noticed the object to be a white tube with burnt ends and a dark substance inside of it, referred to as a “tutor straw”.

Goodman began emptying the other pocket and pulled out two long shoe strings tied together and a black rope. The officer noted that these items are known to be used as tourniquets for drug use. Goodman then removed the tutor straw from his pocket but refused to hand it over to the officer. The officer reached for the straw, but Goodman jerked it away from the officer with both hands and began running through the apartment complex.

Goodman shed the back pack he was wearing when the officer tried grabbing onto it and continued to run despite being told by the officer to stop. Jumping over a barbwire fence and into the desert east of the Valley Apartments, tripping over bushes, Goodman was then seen reaching into the front of his pants. Goodman was warned not to put his hands in his pants or he would be tased. However, he continued to reach in the front of his pants so the officer deployed his taser into Goodman’s back. Appearing to be unfazed by the electric shock, Goodman swiped the probes away and continued to run. The officer grabbed hold of Goodman’s shirt and told him to get on the ground. Goodman said, ‘no, let me go.’ Goodman attempted to punch the officer in the face but his punch landed on the officer’s body camera, knocking it off his shoulder.

The officer told Goodman to get on the ground or he would pepper spray him. Goodman refused and managed to wiggle out of his shirt. Before he could get away, the officer grabbed his body and forced him to the ground. Goodman apparently managed to punch the officer several times, and the officer punched him in the face in an effort to subdue him. Goodman, however, continued to struggle and grabbed onto the officer’s gun with this left hand. The officer pried Goodman’s hand off of the gun and delivered several more strikes to his face as Goodman continued to grab at the officer’s weapon. The officer finally deployed pepper spray into Goodman’s face and told him to put his hands behind his back.

Other officers arrived to assist with handcuffing Goodman. As the officer told them about Goodman trying to get his gun, Goodman interjected, “I wasn’t going for your gun, I was trying to grab your belt.”

Bags of heroin and  methamphetamine, two tie offs, a lighter, along with the “tutor straw” and tin foil with burn marks and residue were found in Goodman’s possession. When the officer asked Goodman why he ran, Goodman stated he didn’t want to go to jail and have withdrawals. He admitted that he had been struggling with a drug addiction. Goodman stated he had not burglarized or robbed anyone in the area prior to their contact that night.

Goodman and the officer were both treated at the Mount Graham Regional Medical Center and discharged shortly after.