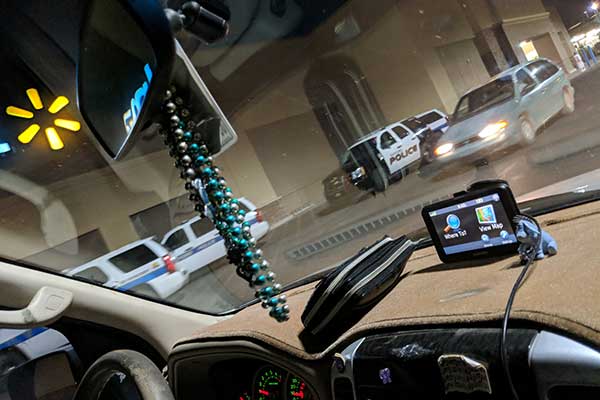 SAFFORD – Officers were called Walmart on Monday night due to reports of a man throwing items off shelves, including light bulbs and acting strange.

When the officers found the man in the hardware section, he was leaning on a basket full of items that had been removed from their packaging including what appeared to be numerous electronics. He was also in the process of drinking a bottled ice tea as officers spoke with him. While speaking with the man, officers noticed he was making fast, sporadic and uncontrolled movements with his arms, and legs. His body also appeared to be twitching and when asked if he needed medical attention, he declined.  The man was identified as Joseph Ratliff and insisted that he was not throwing items, he was dropping them due to a back injury but claimed a man posing as a customer freaked out on him. Ratliff stated he checks the items before purchasing to make sure of what he is getting.

Authorities informed Ratliff that he needed to leave the store with them and would not be able to purchase the items per Walmart staff. When they approached the exit, Ratliff began flailing his arms, nearly hitting an officer. Police told Ratliff that he appeared to be high, which resulted in obscene remarks from him. The decision was made to handcuff Ratliff but while doing so, he continuously struggled aggressively with authorities until they were able to get him handcuffed. After the struggle, Ratliff complained of back injury and medical staff was requested to the scene. Upon their arrival, Ratliff would not calm down enough for medical staff to safely treat him. Ratliff was transported to the emergency room where he was treated for possible back injury. An officer then explained to Ratliff that he was being charged with opening packaging and removing items in Walmart. He was cited for shoplifting and disorderly conduct and also being trespassed from Walmart. After being treated, Ratliff was transported to Greenlee County to a family member’s residence and was released pending charges.

Later the officer met with Walmart staff and obtained a receipt for the packages opened. The officer was informed that all of the packaging and merchandise that had been removed had to be destroyed and would be considered a total loss. The total monetary amount of the items including tax came to the amount of $406.12