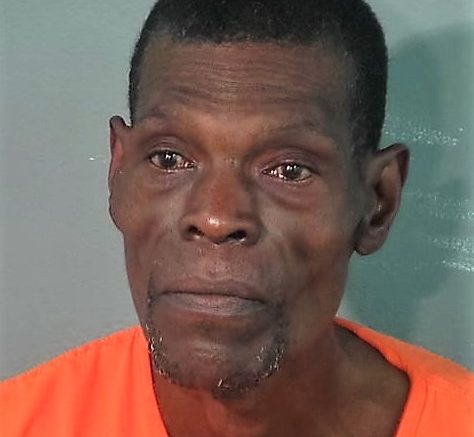 Contributed Photo/Courtesy GCSO: Thomas Walker was booked into jail for allegedly trespassing in a home shortly after he was released from jail.

SAFFORD – A man who wanted to stay in jail got his request granted Monday, after he allegedly caused a disturbance at a residence.

Thomas Walker, 59, was arrested and booked into the Graham County Jail on a charge of criminal trespass in the first degree. Walker had just been released from the jail less than three hours earlier.

Walker was initially jailed Sept. 14, after allegedly beating his wife with a baseball bat and choking a 12-year-old autistic boy. He was charged with multiple counts of assault and the victims were granted a restraining order against him.

Walker soon violated the restraining order shortly after being released from jail, however, and was incarcerated for interfering with judicial procedure. Once again he was released but this time refused to leave the jail lobby, saying he wanted to go back into the jail instead. By the time a Graham County Sheriff’s deputy arrived to deal with Walker, he was gone.

After being incarcerated again, he was released at about 9 p.m. Monday. According to a Safford Police report, Walker approached an officer and asked for a cigarette. He then asked the officer to transport him to his apartment at 565 N. College Ave. in Thatcher. The officer, who was privy to the restraining order against Walker, told him he could not give him a ride there because it would be in violation of a court order. Walker then left the area.

A short time later, officers were dispatched to a residence in the 900 block of 7th Avenue regarding a man attempting to open car doors.

Upon arrival, a resident said he and his wife were in their bedroom when a thin, black man approximately 6 feet tall walked in his front door unannounced and told them he was hungry. The resident gave the man, later identified as Walker, some cake, but then Walker began to mess with some car keys, according to the resident. Walker then woke up the resident’s daughter and accused her of smoking in the house.

At that time, the resident called the police and Walker walked out the back door. The resident said he wanted to pursue charges against Walker so he could not repeat his offense with another family. Walker was later found one block west of the residence.

Upon speaking with an officer, Walker accused the resident of several crimes, including attempting to solicit him to murder the resident’s wife.

After speaking with Walker, the officer placed him under arrest and booked him into the jail.