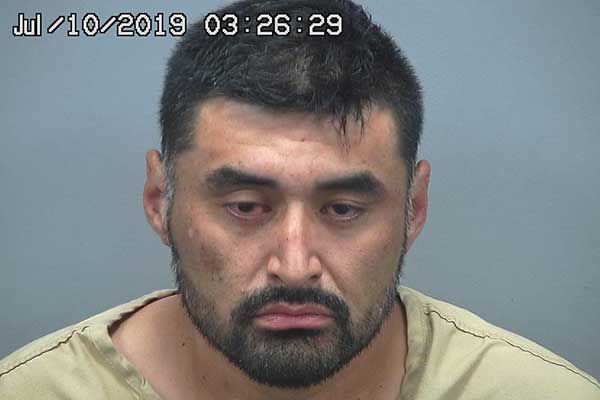 SAFFORD – A woman called authorities on Tuesday, July 9, 2019 at about 2:00 PM to report that a man was passed out in her front yard.

A Safford police officer arrived to find a man lying on his back in the front yard of the residence. The officer approached the man, later identified as Juan Rojo, and verbally tried to get his attention but Rojo didn’t move. The officer then nudged Rojo with his foot, trying to wake him up but Rojo still didn’t respond. The officer finally managed to awaken Rojo somewhat and asked if he needed an ambulance. Rojo mumbled something and the officer could smell alcohol on his breath. He was apparently coughing and seemed to be choking. Rojo again leaned back and appeared to slip unconscious. The officer clapped his hands loudly to wake Rojo up and asked him what his name was. Rojo managed to mumble his first name.

Rojo slowly began to wake up. The officer continued to talk to him but the more alert Rojo became, the more agitated he became. He refused to tell the officer his last name. The officer asked how much Rojo had to drink. Rojo replied, “not enough for you to hold me here.” Rojo then told the officer that he was going to leave, but officer told him that he was going to be detained until he figured out who Rojo was and  why he had passed out in somebody’s backyard.

Rojo tried to leave so the officer told him that he was going to handcuff him. Rojo continued to resist the officer and refused to be handcuffed. The officer ended up tasing him and taking him to the ground onto his stomach. Rojo continued to resist the officer and hid his hands under his chest, refusing to put them behind his back. The officer deployed a taser again into Rojo’s back while giving loud commands to put his hands behind his back. Rojo finally complied. Other officers arrived on the scene along with an ambulance. Rojo refused to cooperate with medics and still would not provide his last name.

The homeowner later told authorities that she did not expect things to go the way they did as she watched the drama between Rojo and the police officer play out.

Rojo was placed in a patrol vehicle and transported to the hospital to get the taser probes removed. On the way, Rojo reportedly continued to hurl verbal insults and would not provide his last name. Upon arrival at the hospital he was disrespectful to the hospital staff. Finally Rojo provided his last name. Authorities ran his information through dispatch and confirmed Rojo’s identity from prior booking photos. Dispatch confirmed that Rojo had two warrants for his arrest – one out of Clifton for false reporting, and one out of the Department of Corrections for absconding his release supervision.

Rojo was medically cleared to be booked into jail. On the way to the jail, Rojo experienced mood swings; one moment apologizing for being disrespectful and later verbally insulting the officer.

Rojo was booked for resisting arrest and criminal trespass.