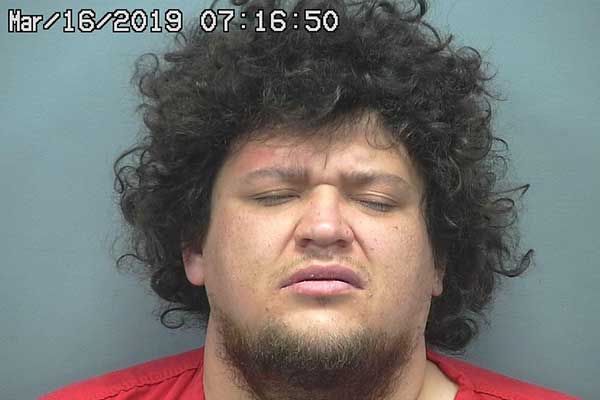 SAFFORD – Last Friday at approximately 5:20 pm, officers were dispatched to a  convenience  store on 1st Avenue in reference to a robbery. When an officer arrived on scene, several customers and two store clerks were present at the counter. The store clerk reported that a Hispanic male came into the store and asked for two cartons of Marlboro red cigarettes. The clerk had one of the cartons in her right hand and was punching keys on the register with her left hand. As she did this, the man tried to pull the carton out of her hand but she pulled it back. The man then grabbed a plastic money container off the counter that had coins in it, but the container broke open and money spilled all over the floor. The man then tried to grab a rack of batteries that were on the counter but could not get any so he turned and walked out of the store. The clerk did not know if the man got any merchandise or not. There were coins and merchandise all over the counter and floor. The clerk told the officer she was scared and was worried the man was going to pull out a gun. A witness told authorities that the Hispanic male with dark bushy hair had left in a red truck with New Mexico plates.

Meanwhile, a DPS trooper had located the truck heading East on Highway 70 and requested assistance. Authorities conducted a high risk stop on North Highway 191 at mile marker 134. Graham County Deputies and BLM Rangers were on scene to assist. The passenger and driver of the vehicle were detained in handcuffs without incident. The passenger, identified as Abran Bejarano, was wearing a blue shirt and blue jeans, matching the description of the man described by witnesses.

When Bejarano was asked what had occurred, he stated the cashier was rude to him so he shoved the cartons and objects on the counter away from him out of anger and exited the store.  Bejarano stated he did not attempt to steal the cigarettes from the store or the box containing donation money. When an officer spoke with the driver of the truck, he said that he barely met Bejarano at training for work and Bejarano asked him for a ride to the store so he could purchase some cigarettes. The driver saw Bejarano exit the store without merchandise and reported he had no idea of Bejarano’s intentions. The driver was released from the scene.

Bejarano was transported and booked in the Graham County Jail. While at the jail Bejarano became confrontational and continued to insult officers. Bejarano was arrested for a strong armed robbery.