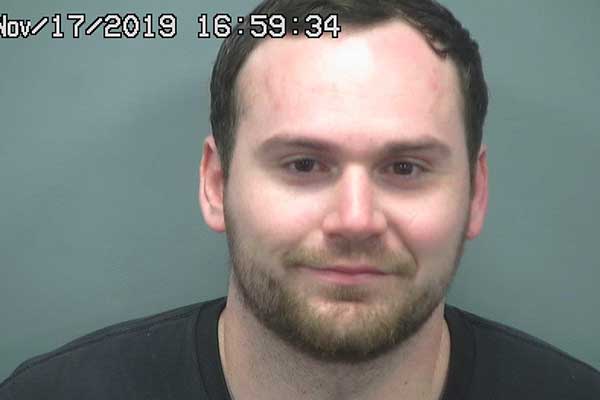 A Safford police officer was dispatched to Walmart on Sunday, November 17 at approximately 1:15 P.M. in response to a report of shoplifting. When the officer arrived, he approached the entrance and saw a Walmart loss prevention associate and another employee following a man who was briskly walking away from the store. The loss prevention associate told the police officer that the man they were following had returned some stolen merchandise and gotten a gift card for the return.

The officer observed the suspect, wearing all black, trying to hurry and get to his vehicle. The man looked back at the officer and then ducked down behind a car and kept walking. The officer caught up to the man and stopped him by a white Mazda SUV. The officer told the man, identified as Tyler Herrera, why he had stopped him. The officer asked Herrera why the store associates were accusing him of returning stolen merchandise. Herrera was holding a white Stage shopping bag and two balled-up Walmart bags. Herrera pointed to the white bag and told the officer that he had come to return some items that he had found in his new home that he had just purchased. He said that he had just bought a house in Safford and there was a large amount of assorted items left in the house. Herrera said that he didn’t know where the items came from but since they were in new condition he wanted to return them to the store. He told the officer that he had returned several of the items and got a gift card. He went on to explain that there were several items that the store would not accept, such as a large pool pump that was in his car.

After Herrera left that morning, the loss prevention associate reviewed surveillance footage and saw Herrera place several items in his cart before leaving the store. The video showed Herrera select an automated blood pressure cuff from the pharmacy area and place it in the cart. He also got a sound bar from electronics. He left with these items still in his cart after the security associate retrieved the PC games.

When Herrera returned to the store later that day, one of the items he returned was the blood pressure cuff. The officer reviewed the surveillance footage with the loss prevention associate and confirmed that Herrera had stolen the items. He went back to his patrol car and talked to Herrera about what he had seen on the video. Herrera stated that the loss prevention associate was a liar. Herrera claimed that he had not stolen the blood pressure cuff. He claimed that it was one of the items he had found in his new home. He insisted that he took the blood pressure cuff back to the store and compared it to the one on the shelf.

Herrera was placed under arrest and transported to the Graham County Jail. The officer searched Herrera incident to the arrest and found a large Samsung phone and a white wallet. While searching the wallet at the jail, the officer found a Walmart gift card and accompanying receipt for the items that were returned. He also found a Home Depot gift card for store credit, another gift card from AutoZone and a return receipt from Game Stop. The officer took possession of all of the store gift cards and receipt, suspecting that that they may be the result of similar thefts at the other stores.

The officer went back to Walmart and gave the gift card to the loss prevention associate. He went to Home Depot and spoke to a manager, who turned the matter over to their loss prevention team to investigate.

The officer then went to Game Stop and spoke to a store associate. The employee said that he remembered Herrera coming into the store that day. He said that Herrera returned several old Wii video games and was carrying a white plastic bag. He said that Herrera was acting suspiciously and odd. Herrera apparently asked the employee if he wanted to buy a Samsung cell phone. The associate said that the store does buy cell phones but could not buy the one Herrera had because it was locked and Herrera didn’t know the password.

The manager at AutoZone told the officer that he remembered Herrera coming in and returning some parts but the return was handled by an employee who was not available at the time. A little later, the officer was contacted by the AutoZone employee by telephone. She told the officer that Herrera had come into the store earlier that day and wandered around the store for several minutes while holding a white plastic bag. Then Herrera came to the counter and wanted to make a return. He returned some speaker wire, spark plugs, headlight bulbs and some velcro strips. She told the officer that he was acting suspicious and his behavior was odd. The next day the employee came into the police department and provided a receipt with the items Herrera returned. She said that an inventory check revealed that two of the items had been stolen from the store.

Herrera is facing charges of Fraudulent Schemes and Arifices, Shoplifting and Trafficking in Stolen Property.