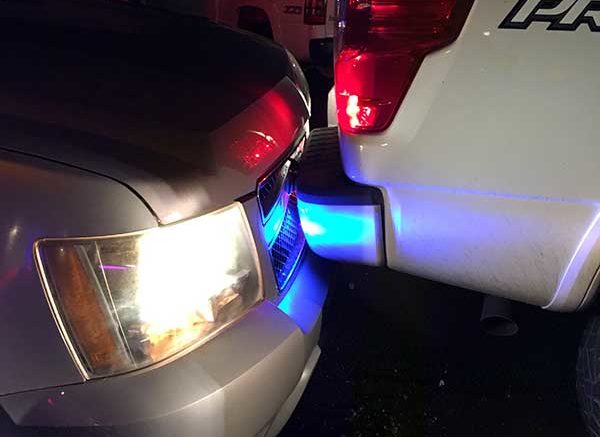 SAFFORD –  In the early hours on Saturday, an officer was on patrol in the area of 6th Avenue and 7th Street when he observed a truck traveling at a high rate of speed make a turn without signaling and continue down the middle of the road. The officer had to pull over to let the truck go by.

The officer continued to yell commands and called for police assistance. The driver’s door opened and the officer saw a male driver and ordered him to face forward and to keep his hands visible. The man complied. He was also told to stay in the vehicle until other officers arrived. The man reached toward the driver door panel and said there was a gun there, but he was advised not to touch it.

After another officer arrived, the man walked with police to their patrol cars and was placed in handcuffs. While doing so, the officer could immediately smell an odor of an alcoholic type beverage coming from the driver’s breath as he spoke. He also appeared slow to react to commands as well as his balance appeared off at times. When the man was placed in handcuffs, he asked the officer what had happened. The police informed him that he had hit their patrol car. He responded that he didn’t know and was on his way to pick up his cousin who was drunk.  The man reported that he didn’t have his license but identified himself as Alexander Aranda. When asked how much he had to drink that night, he stated he hadn’t been drinking because he was coming to pick up his cousin who was intoxicated. Aranda later stated he had one beer.

After Aranda was read his rights he agreed to take a series of impairment tests. The portable breath test registered 0.195%

Aranda was placed under arrest for DUI and criminal damage for hitting the patrol car. Thatcher police responded and did an accident investigation and took photos. Aranda was taken to the Safford Police Department and later released to a family member.