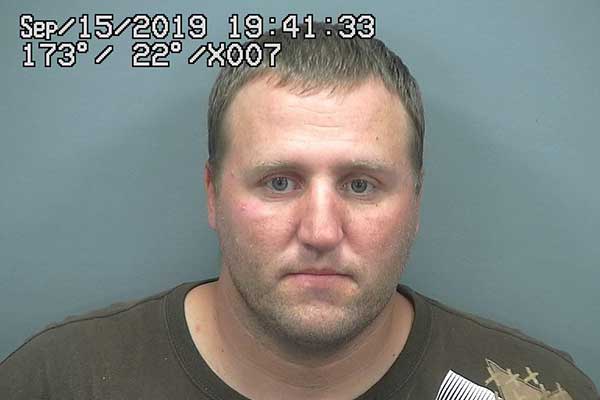 SAFFORD – Authorities were called to Walmart at approximately 12:30 a.m. on September 30, 2019. Dispatch advised responding officers that a male subject, wearing only a pair of shorts had left the area walking north. A Safford police officer found the suspect drinking beer next to the Ice King. Another officer arrived and assisted detaining and handcuffing the suspect, identified as Scott Rivers. The officers noted that Rivers was heavily intoxicated and there were beer cans on the ground near him.

A Walmart manager walked to the area and told authorities that Rivers had entered the store and walked to the alcohol aisle, where he selected a  30 pack of Keystone Light from the cooler. Rivers apparently opened the beer and began drinking it in the store while walking toward the entrance. Rivers then walked out of the store without paying for the beer. He walked to a bench area north of the entrance, where he was approached by an associate and store security. Rivers apparently grabbed three cans from the beer pack and stuffed them in his pockets before the merchandise was confiscated. He then left the area on foot, walking north toward Highway 70.

Rivers reportedly had a blood alcohol level of .392. Because of his level of intoxication, he was cited and released. He was also trespassed from Walmart. A police officer gave him a ride to the area of Little Hollywood.

Approximately three hours later, officers were dispatched to the Speedway convenience store on 8th Avenue in reference to a male suspect, wearing shorts and wrapped in a blanket. The suspect had allegedly stolen a can of Mike’s Hard Lemonade.

Officers located Rivers walking in the 300 block of 8th Street, matching the description given of the suspect. The officer asked him where the stolen liquor was. Rivers reached into his pocket and pulled out an unopened can of Mike’s Hard Lemonade. He was attempting to open and drink it. The officer tried to persuade Rivers to put the liquor down, but ended up escorting Rivers to the ground.

Rivers was medically cleared at that time and booked into the Graham County Jail.