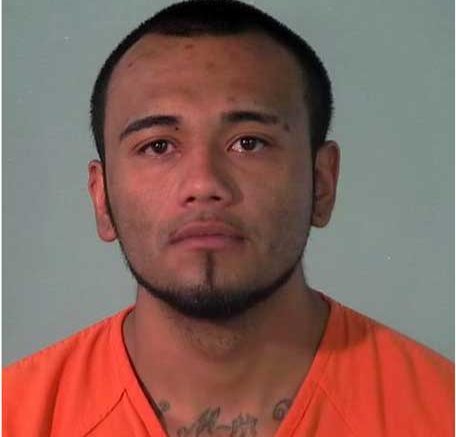 Contributed Photo/Courtesy GCSO: Sergio Garcia was booked into the jail after allegedly choking his girlfriend after she accused him of cheating on her.

SAFFORD – A Safford man accused of assaulting his girlfriend was arrested and booked into the Graham County Jail on Thursday, July 13, after a short foot pursuit.

Sergio (AKA Serjio) Ezekiel Garcia, 22, of Safford, was booked into the jail on charges of assault/domestic violence and disorderly conduct.

According to a Safford Police report, the victim stated she driving with Garcia in the passenger seat at about 6:30 p.m. when he became angry with her for confronting him about cheating on her with another woman. The victim said Garcia was yelling at her and demanding she take him to a friend’s house but she refused. At that time, Garcia grabbed and jerked at the steering wheel, and the victim drove into the Allstate Insurance parking lot at 102 E. U.S. Highway 70. Once in the parking lot, Garcia proceeded to choke the victim and assault her.

By happenstance, the victim’s sister was traveling on U.S. Highway 70 at the same time with their grandmother and was stopped at a traffic light. The sister said she saw the victim driving eastbound and then erratically pull into the parking lot and witnessed Garcia assault her. She said the victim was struggling to break free from Garcia’s grasp and crying and screaming for help.

The sister came to the victim’s aid and yelled at Garcia to let go. Garcia then fled the scene on foot as an off-duty officer who also saw some commotion arrived at the scene. The sister then flagged down a passing patrol officer who began to search for Garcia.

After not locating the suspect, the officer returned to the parking lot and the sister advised she had seen Garcia run into the yard of a vacant residence near 1st Avenue and 3rd Street.

The officer exited his patrol vehicle and spotted Garcia running out from a backyard and into another yard in the 100 block of 4th Street.

The officer pursued Garcia and caught him when Garcia failed to negotiate a backyard fence. He was then taken to the jail.