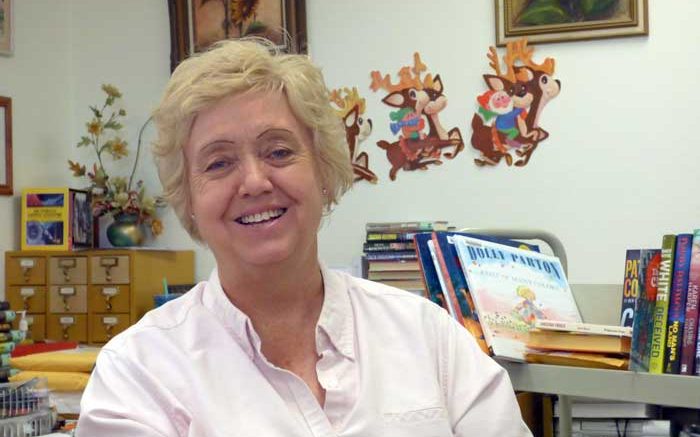 Photo By Dexter K. Oliver: Duncan Town Librarian Barbara Blackburn will retire from her position at the end of the year after two decades of service. Blackburn has always provided a winning smile along with her invaluable service to the town of Duncan.

DUNCAN – After two decades of service, Duncan Town Librarian Barbara Blackburn will turn her bookmark over at the end of the year to give way to the next keeper of the texts.

The town of Duncan has been extremely lucky to have had Blackburn as its cheerful and knowledgeable librarian for two decades, since even before the current building was erected in 2000. She has held down the fort with compassion and reliability for each and every one. But, as all good things must, it is almost time for her tenure to come to an end.

Barbara will be passing the torch to Ashley Germaine, her protégé, who is already well-versed with sitting in the librarian’s chair from her one-day-a-week fill-in past experience. Although Barbara will be retiring from her full-time position Dec. 31, she will be relieving Germaine on Tuesdays each week, and be available for fill-in after that.

Public libraries are an important component of a free society. They are a repository for works that reflect our culture and all its inherent diversity. Such institutions support and encourage personal productivity and quality of life. They help build strong and vibrant communities, providing safe and significant meeting spaces for the cross-pollination of ideas, politics, and art. They are an influential tool in the realm of early literacy and education. Libraries help define a community’s identity and may arguably be the most important place in town.

At the heart of such illustrious and notable facilities presides the librarian, who brings it all together. Along with managing the daily operations and filing of bureaucratic reports incumbent with the position, a librarian is more importantly an informational guide.

This role is constantly evolving. Since the first known library was created in Mesopotamia during the 8th century B.C., there have been special people known as the “keepers of the books”. Times have changed with literary assets evolving from clay tablets to Greek scrolls and then to books that were so rare and valuable during the Middle Ages that they were chained to desks for security.

Nowadays, a modern librarian has to deal with providing and maintaining information in many formats: books, periodicals, electronic sources, videos/photo files and web-based and digital resources. Keeping pace with such a rapidly changing world is a daunting task.

Through it all over the past 20 years, Blackburn performed her duties admirably. Now, she and her husband, John Blackburn, will be starting the next phase of their lives and we wish them well.

Dexter K. Oliver is a freelance writer from Duncan whose mother and favorite cousin were both librarians.