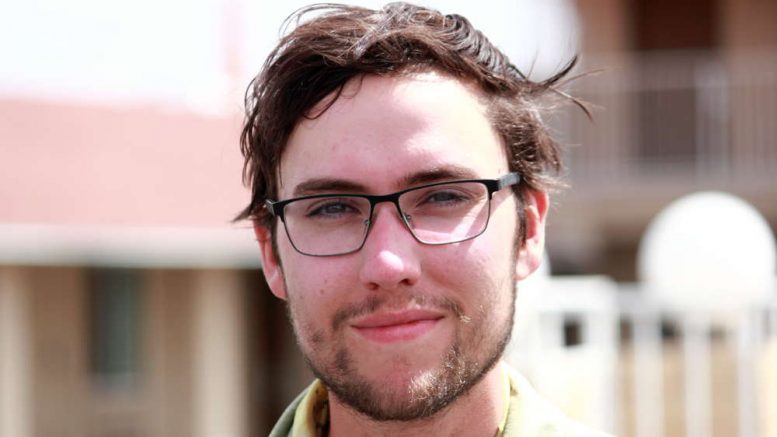 Eric Burk Photo/Gila Valley Central: Sam Speckman is through-hiking the Grand Enchantment Trail from Phoenix to Albuquerque and is currently hiking through Graham and Greenlee counties.

SAFFORD – Sam Speckman walks about 14 miles a day. He left Phoenix on March 23 and traveled more than 233 miles to arrive in Safford on Sunday, April 9.

He is hiking the Grand Enchantment Trail (GET), an informal combination of roads, trails and cross country travel that meanders 770 miles from Phoenix to Albuquerque, passing through the Pinaleño Mountain Range, down 8th Street in Safford and north past Morenci into New Mexico. He expects to arrive in Albuquerque in May.

Speckman is a 23-year-old native of Salem, Oregon. A few years ago, one of his friends suggested they do a backpacking trip in Oregon. Speckman loved it and wanted more. Last year, he hiked the Pacific Crest Trail (PCT) from the California-Mexico border all the way to Canada. 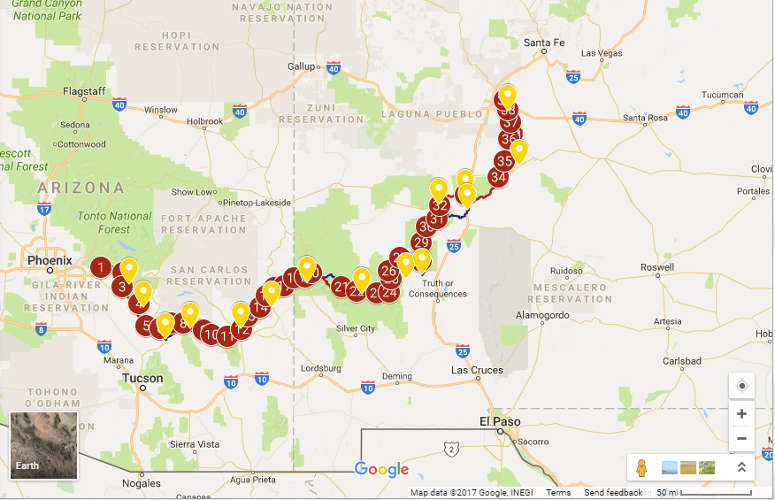 The red circles show waypoints along the Grand Enchantment Trail. The yellow markers show nearby towns. This map and others can be found at grandenchantmenttrail.org

His hobby of long-distance trail hiking is called through-hiking. After Speckman finishes the GET, he plans to take a Greyhound bus to Lordsburg, New Mexico, and hike north along the Continental Divide Trail to Canada. Speckman expects to arrive in Canada in September.

When he pitched the idea to hike the PCT to his family, they thought he was crazy. Now, Speckman says they think it is cool, and they support him by mailing him gear as he needs it. He calls home about once a week. In the fall and winter, he works at a car wash to fund his trips. Eventually, he wants to attend college to study land management. However, since he is single right now, Speckman is able to pursue his unusual lifestyle. He loves “the feeling of freedom.”

To prepare for his hikes, Speckman studied the basics of hiking and the environments he would walk through. He packs minimally, aiming to have barely enough for the worst situation.

The GET is designed to follow waterways, including the Gila River and Aravaipa and Eagle creeks. There is usually water of some type every 10-15 miles. The longest stretch between water Speckman has seen is 20 miles, but he is not picky.

“There’s a lot of sharing water with cows,” he said.

The GET website, www.grandenchantmenttrail.org, offers advice about the trail, including how to find water. It also maintains a spreadsheet, updated by hikers, of water sources along the trail and advises hikers carry a water purification device.

The website advises, “The presence of cattle or fresh dung is a sure sign of water, likely within a one-mile radius of your location. In an emergency, use a small monocular to scout for windmills, tanks or areas of lush vegetation on the horizon.” 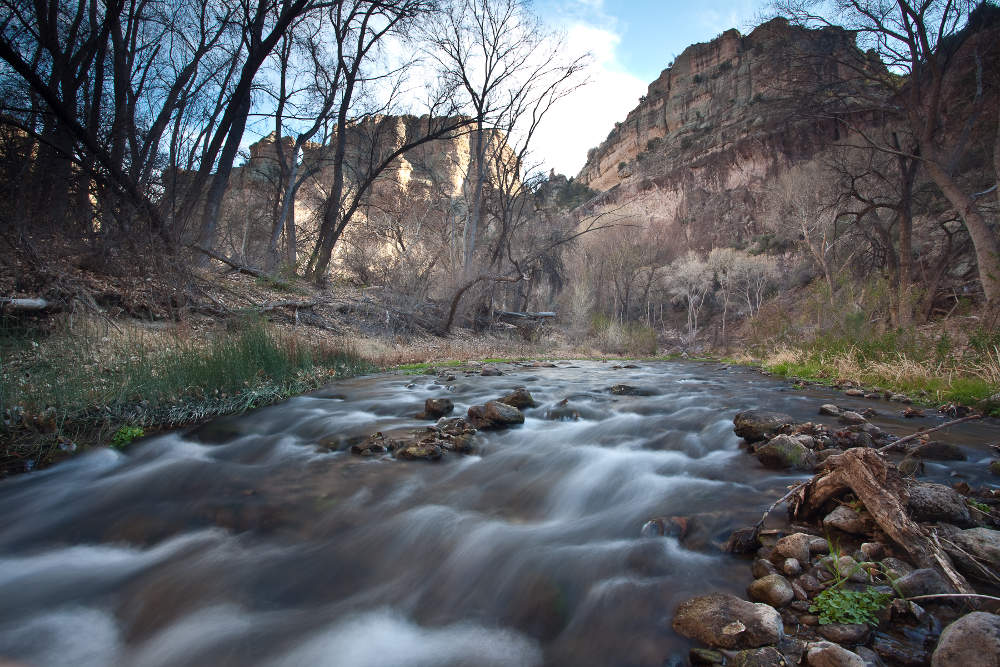 The website also warns hikers to carry as little gear as possible to maximize the amount of water they can carry. Speckman’s pack weighs about eight pounds without food and water. His gear includes a smart phone and a USB battery, a tiny flashlight operated by a AAA battery, an emergency GPS beacon, paper maps, a light tarp and a quilt rated to 10 degrees. He has a sheet of paper with a list of towns and resources along the trail. He also carries a fleece jacket, which is his only spare piece of clothing. In the through-hiking community, many hikers do not carry firearms. Firearms are added weight, may run afoul of laws along the trail and are seen as unnecessary.

Speckman has encountered substantial amounts of snow at elevation, including on Mount Graham, but he tries to camp lower down for the warmth. He spent Saturday night in Ash Creek above Pima.

While walking through Safford, Speckman wears a hat, a light windbreaker, nylon pants and a pair of trail shoes. His shoes are nearly worn out. He will order a new pair and have them mailed to him in Glenwood. The GET has a network of remote general stores and similar sites that accept packages for hikers. Speckman can also have things mailed to himself at post offices along the route. He left a table covered in gear at home, and his family mails him things as needed.

Unlike the PCT, the GET is not very popular, and Speckman gets lonely. Occasionally people give him rides for short sections, including one rancher near Klondyke. Speckman met a few other people on the GET, who provided a relief from the loneliness. Speckman thought those hikers would end their trek in Safford.

“I usually talk out loud to myself if it’s been a long day,” he said. 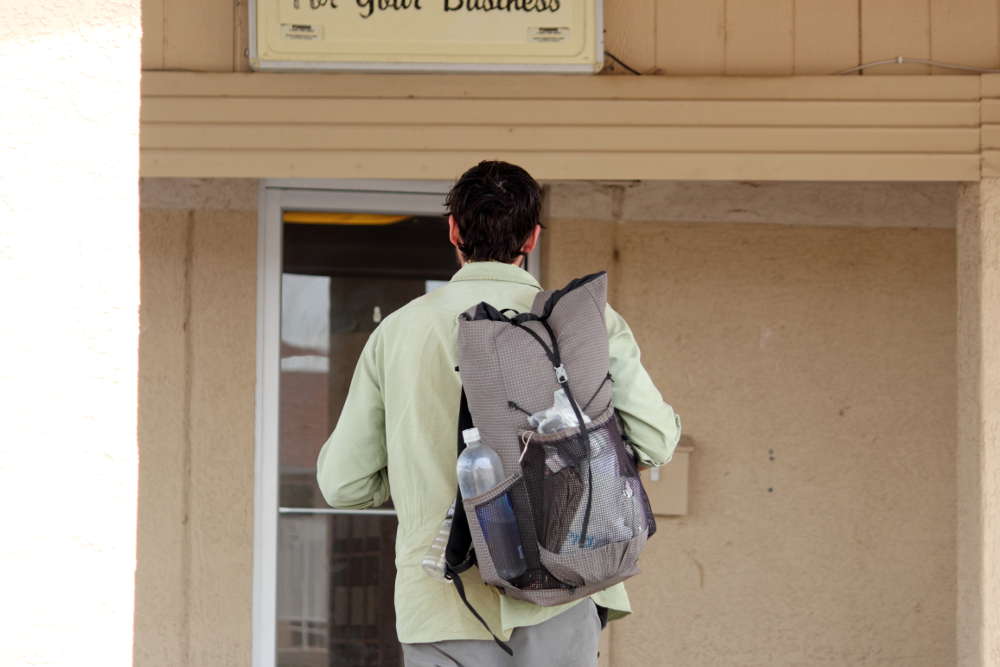 He gets up at first light, around 5:30 a.m., and walks until dark. He’s usually so tired that he goes straight to sleep, but when he doesn’t, the night can be a little spooky, especially in the forests. He prefers the night visibility of the open desert. He said forest camping is like huddling up into a small hollow, surrounded by the darkness.

“The nights are kind of scary, (I hear) every stick that breaks, every pine cone that falls,” Speckman said.

He said the best part of the trail was through Aravaipa Canyon, where a blue heron led the way through the canyon for several miles, staying just 50 feet in front of him. Speckman has also seen coatimundi, turtles, coyotes, deer and other smaller animals. He has not seen any dangerous predators on this hike.

Those spectacular moments make the loneliness, discomfort and exhaustion worth it, he says. His favorite moment was encountering a pond near Rogers Canyon outside of Phoenix, after 25 miles of desert hiking.

“There’s just suddenly this swimming hole surrounded by aspens,” he said. “I just jumped in there. I forgot all the loneliness. It was so cool.”