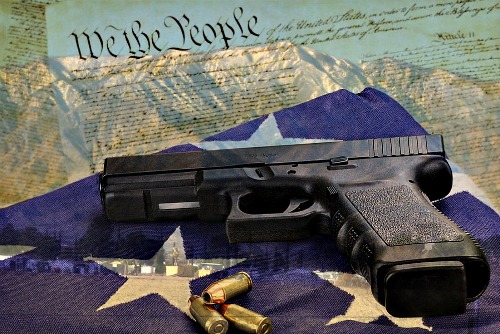 It has been nearly a month since the Orlando shooting occurred on June 12th. The shock and anger of the attack in Orlando brought people together in grief, and raised questions on gun control. There are extremists on both side of the argument. Now is the time to hear what the people of the Gila Valley have to say on the subject.

Safford Mayor Gibbs was straightforward in his statement about the gun control situation. “I believe the American people have the right to own weapons.” Gibbs said firmly.

Thatcher Police Chief Shaffen Woods’ statement was not as brief but just as plain concerning the gun control issue. “ I am very much in favor of gun rights and the right to carry one,” Woods stated. “I understand that there is a huge responsibility that comes with that. So I prefer that those who do decide to carry a firearm educate themselves on the laws and how to safely do so. There are plenty of laws already that regulate who can possess one and who can’t so as long as they are legal to have one I don’t care if they carry it. I would prefer they carry it concealed but that’s a personal choice.” He went on to say, “In a situation such as Orlando, if only one person there was armed we could be talking about a very different situation. Self-preservation is legally protected anywhere in the US but I do not think the government should be able to tell me how to best protect my family or myself. I will be held accountable by the laws on the books if I misuse the tool of choice, whether it be a hammer, stick, car or gun. A gun is a tool and I believe it’s better to have and not need than need and not have.”

Judge Michael Peterson, the presiding Superior Court Judge in Graham County, had a different idea as to what really is the root of the violence problem in America. “A gun can be used to hold up a bank, or it can be used to protect your family from an intrusion into your home from a burglar intent on hurting them. Any right-minded person would be against using a firearm to commit a crime. That same right-minded person would be in favor of using a firearm to protect himself/herself and their family. The issue is therefore not solvable by the passage of laws that only honest citizens will abide by. It would be extremely foolish to believe that we will be safer as a society if we disarm all of the honest citizens,” Peterson stated. “Firearms have been around a long time. Our society is increasingly violent. Until we address the root cause of the problems- family disintegration, fatherlessness, all forms of abuse, drug use, a lack of ability of people to take responsibility for themselves, the glorification of violence in the media, despicable video games, etc., we will not solve this problem. This involves a much deeper examination of each of us in our society than a simplistic quick fix that is only fool’s gold.”

Resident of Safford and gun owner Julia Newlin, believes that gun education is a must. Just recently she took the concealed weapons course in Florence. “Even though it is legal to conceal carry in Arizona without a permit, I would highly recommend taking a concealed weapons class. Anytime you can take the time to increase your knowledge, especially with something as important as gun ownership, you should do it,” Newlin said. “ Knowledge is power and following the law is extremely important to me.”

Pima resident Nicolas O’Barry believes that the violence issue goes far deeper than gun control. “No one is proposing the disarming of America. More than anything in these violent times, I think we need more balanced thought, we need more love and consideration for the safety of one another and, above all, we need to ask ourselves fundamental questions about our society,” He said. However, O’Barry did suggest a different approach to gun regulations. “Personally, I would strongly advocate setting up a system for gun ownership similar to motor vehicle ownership. Testing, licensing and stronger registry to improve accountability. I would also strongly advocate repealing the Dickey Amendment of 1996. This is a piece of legislation that prohibits government funding of CDC research into gun violence. Without research, we are essentially being denied full information on the cause and effect of gun violence in America. Detailed research into the relationship of mental illness, violence and guns is long overdue.”

These are just a few of the varied opinions of the Gila Valley. Harry S. Truman, the 33rd president of the United States said, “We need not fear the expression of ideas—we do need to fear their suppression.”