A local mother is speaking out about the danger of laundry detergent pods after her baby was severely injured after ingesting one and almost lost her life.

“Had I listened to the warning labels and simply stuck around to call poison control, she would not be here.” – Mother Stephanie Eyre describing an incident in which her baby ingested a laundry detergent pod.

SAFFORD – It was a quiet afternoon not unlike any other in the daily lives of a local family. However, the day nearly turned into tragedy as an unsuspected danger lurking in the laundry room almost ended a baby’s life.

Jane Eyre, 1, ate a Tide pod while her mother was away and she was being watched by her father and her elder cousin. For those who might be unfamiliar with the product, a Tide pod is a condensed transparent packet of laundry detergent that was created for laundry convenience. When ingested by children, these seemingly innocent pods can be lethal.

Jane’s mother, Stephanie Eyre, of Safford, told Gila Valley Central that she had gone to the Department of Motor Vehicles, leaving her children to be watched by her husband and an older cousin. However, Stephanie returned earlier than planned.

“As soon as I pulled up, Leona (the cousin) ran out and said that Jane had eaten a Tide pod and they were calling poison control,” Stephanie Eyre said. “I was super scared but had no idea how dangerous those things are as they do not say on the packaging. When I went inside my 1-year-old daughter was throwing up violently and looked rather lethargic.”

Instead of waiting for her regular doctor or poison control, Stephanie brought Jane into the Mt. Graham Regional Medical Center Emergency Room. This action on Stephanie’s behalf probably saved her daughter’s life. As soon as Stephanie’s baby was admitted, the ER staff quickly placed a breathing tube in Jane’s throat, but the baby’s oxygen continued to drop. Stephanie was then informed that her baby would have to be flown out to Phoenix Children’s Hospital.

“I watched them fly my daughter out with a breathing tube down her throat and then got a ride to Phoenix myself from a friend,” Stephanie said. “Once we arrived, Jane had to stay under sedation and on a ventilator for five days, but it didn’t end when the tube came out.”

Baby Jane continued to struggle to breathe on her own, even after five days of sedation. After two bronchoscopies and one laryngoscopy, the medical team decided to dilate the child’s airways. After the dilation, Jane began to slowly recover and her status improved.

“We spent most our time in the intensive care unit, and will most likely be having some therapy to get her fully back to normal,” Stephanie said. “But, all in all, we are very lucky to have our little girl back.”

After a harrowing two weeks in the ICU, Stephanie and her baby were able to go home. Now, however, Stephanie is reaching out to the local community in an effort to warn parents of the deadly dangers of detergent “pods” lurking in their own homes.

“I would just like to warn everyone out there whether you’re a parent or not,” she said. “If you or someone you love uses Tide pods or any other pod cleaners, please keep them locked up. I had no idea they were so dangerous, and I seriously doubt I will ever use them in my house again.”

Because of the young children’s developmental stages and because of the shape and color of the detergent pods, many children place the pods in their mouths. The pods burst easily in the children’s mouths, releasing condensed alkaline liquid detergents. Ingestion causes multiple toxic effects, which include the depression of the central nervous system, respiratory distress, dysphagia and metabolic acidosis. 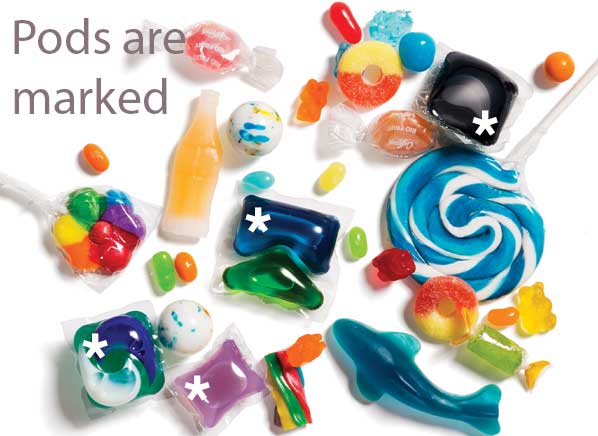 The American Academy of Pediatrics did a study taking poison control data from 2013 to 2014 to determine that the concentrated detergent pods are the most dangerous to children. Over the year of data, the study collected some distressing numbers of harmful effects from ingesting the pods including:

According to the conclusion of the study by the AAP, the laundry packets injuries are more severe than regular exposure to powder or liquid detergents.

After the incident, Stephanie said what bothers her the most is the lack of severe warning on the detergent packet labeling.

“I am seriously disturbed that the warning labels on these things are not more extreme and precise,” Stephanie said. “It only says to call poison control if ingested; it does not tell you that it can cause your throat to swell shut or that the detergent will burn whatever it touches.”

Consumer Reports (CR) has also assessed the data regarding the dangers of laundry detergent pods and children. Because of the alarming numbers of children poisoning and death from ingesting the detergent packets, CR and has gone so far as recommending parents of younger children avoid having pods or packets in their homes.

“Given the continued danger, we have made the decision to not include pods on our list of recommended laundry detergents. (None makes the cut in our latest tests, but some have been picks in the past.) And we strongly urge households where children younger than 6 are ever present to skip them altogether; our new position doesn’t apply to laundry (or dishwasher) pods that contain powder because injuries associated with them are less frequent and less severe.”
-Consumer Reports, (http://www.consumerreports.org)

Consumer Reports have withheld recommendations on other products in the past because of the safety data that was presented. However, CR is withholding recommendation until what they call “tougher safety measures” result in the substantial drop in injuries.

Many consumers state that the laundry packets or pods bear a striking resemblance to children’s teething products and candies. However, it is not only children who are at risk, but the elderly with dementia as well. Multiple dementia victims have been hospitalized because they ingested the packets. One elderly woman was left at home alone and was later found dead after eating three pod packets.

Although many individuals are calling for a redesign of the laundry detergent packets, Stephanie wants the warnings to be clearer and wishes to warn everyone in the community.

“My daughter is very blessed to be here and have such little damage,” she said. “But had I listened to the warning labels and simply stuck around to call poison control, she would not be here.”

How to Make Your Home Safer

To keep children and adults who suffer from cognitive impairment safe from household cleaners, follow these tips from the medical experts we interviewed:

• Remove cleaning products that may resemble food from the home.
• Limit the use of toxic home-cleaning products.
• Keep cleaning products in their original containers and choose products with latches intended to keep kids out, when possible. Never transfer cleaning products into a generic, unlabeled container.
• Store cleaning products in a separate place from food, and lock the cabinet. This is especially important when it comes to sweet-smelling liquid cleaners and bright blue glass cleaners, such as Windex, which could be mistaken for bottles of juice.
• Monitor the behavior of a person with dementia, watching for impulsivity and increasing interest in placing items in the mouth. If you observe these behaviors, remove choking hazards and items that could be fatal if ingested, including cleaners, medications, certain plants, and batteries.