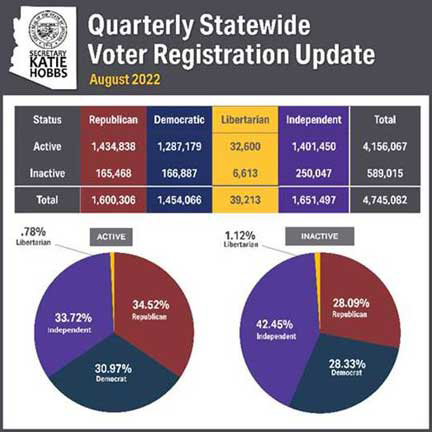 PHOENIX — One day before the Aug. 2 Primary, the Arizona Secretary of State’s office released its quarterly voter registration report, which showed a 6 percent drop in the number of registered voters in Graham County.

Meanwhile, Greenlee County saw a drop of 5 percent between May’s 4,869 registered voters and 4,632 as of Monday.

Sofia Solis, with the Secretary of State’s Office, said in an e-mail to Gila Valley Central the decreases in 10 of Arizona’s 15 counties were “due to list maintenance,” resulting in a statewide drop of 3 percent, down to 4.2 million registered voters as of Monday.

Apache, Coconino, Mohave, Pinal and Yuma counties were the only to show an increase in the number of registered voters.