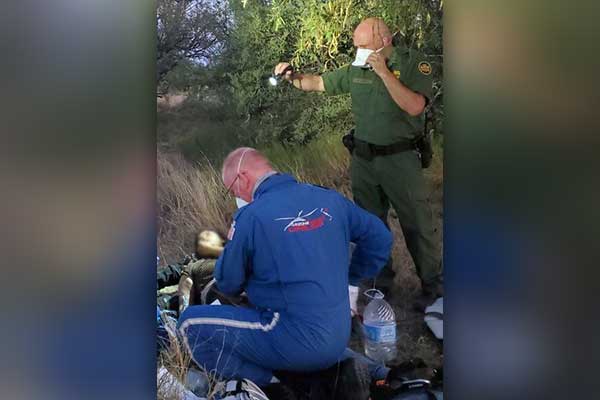 Around 6 p.m. Monday, Tucson Sector agents patrolling the desert near Sells encountered an unconscious 20-year-old Guatemalan man. Border Patrol emergency medical technicians treated the man for severe dehydration, stabilizing his condition until he could be airlifted to an area hospital.

Tuesday evening, agents located two individuals in the desert near Tombstone after receiving a 911 call routed to them by Cochise County emergency dispatchers. While the 25-year-old male caller was in good health, his female companion was in and out of consciousness. Agents requested an airlift for the 26-year-old woman, and Arizona Lifeline transported her to an area hospital via helicopter.

All three persons were illegally present in the United States. They will be processed for immigration violations following their medical discharge by independent medical professionals.

Anyone in immediate distress in Arizona’s vast outdoor recreational and wilderness areas is urged to call 911 or to seek out a rescue beacon. U.S. Customs and Border Protection works closely with other federal, tribal, state and local partners to resolve search and rescue operations across southern Arizona.

For more details regarding this news release, contact the Tucson Sector Public Affairs Office at tca-pao@cbp.dhs.gov or by phone at 520-748-3210. Tucson Sector is also LiveU capable. Contact us to schedule an interview.