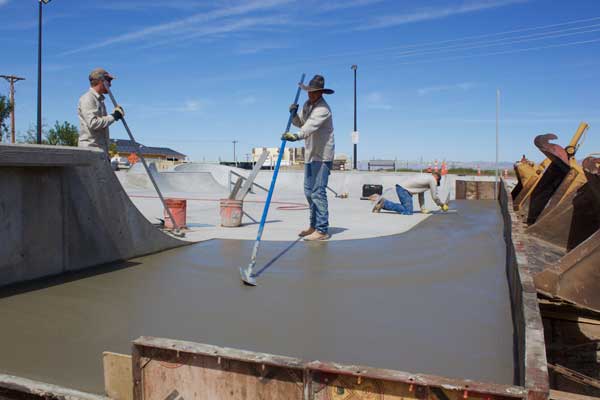 Jon Johnson Photo/Gila Valley Central: Thatcher's streets crew smoothes out some side concrete at the town's new skatepark. The facility should be open for use in less than two weeks.

THATCHER – In less than two weeks, the town of Thatcher will add another amenity to its growing Thatcher Splash Park complex as its new skatepark will be open for business.

Thatcher Town Manager Terry Hinton said the skatepark itself, which has already been used by the area’s youth, is finished and the town is just completing side work, including some additional sidewalk, concrete benches and finishing the facility’s water fountain.

“We’ve done it all in-house and those guys are amazing,” Hinton said. “Right now, I think that they can build anything. They’ve done such a good job, and we’ve had nothing but positive comments from the skaters about the quality and the layout of everything. We are really pleased so far.” 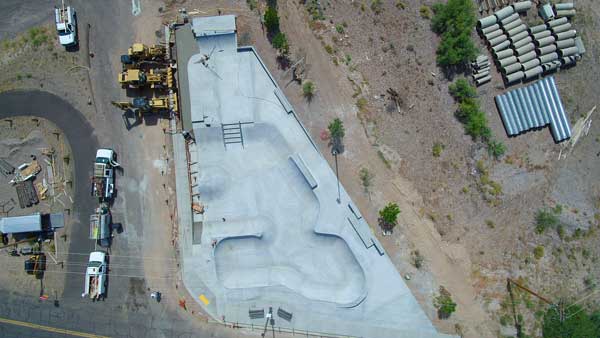 The town began work on the skatepark in July and has stayed true to its $75,000 budget, which includes the design fee of $16,000 to Spohn Ranch Skateparks, the same company that designed and built the Safford Skatepark.

Unlike the skatepark in Safford, the Thatcher skatepark’s wide, open design will also accommodate the use of bikes, at least initially.

“It’s a little bigger (than Safford’s), and we think there’s enough space that they can coexist,” Hinton said. “That’s what our intent is.”

Thatcher’s skatepark features deep, “swimming pool” bowls for carving as well as ramps and steps. It’s open concept allows the user to flow from one aspect to another much in the way a growing number of skateparks in California are designed. It is also designed to accommodate a fair amount of users in the park at the same time. 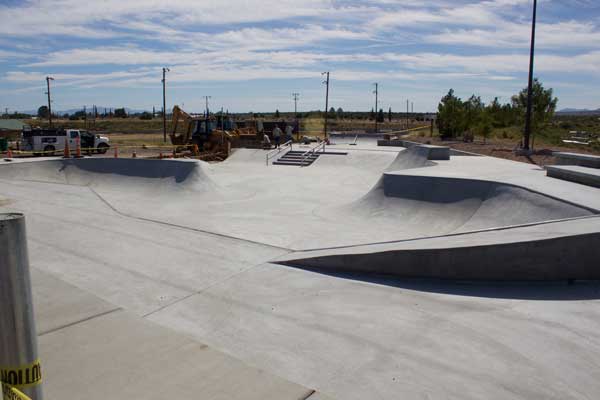 The skatepark is constructed with thousands of sticks of rebar and more than 200 yards of concrete that is 6 inches thick. The town’s street crew saved about $25,000 on the project by packing the concrete in by hand without having to shoot it on like most projects of the sort. The town is still considering putting in a fence along the northern edge of the park next to Ball Park Drive.

Thatcher had been letting people use the skatepark but a group of individuals abused that privilege by moving cones from a side area where concrete was still drying and made gouges and carved their names into the cement. The group was also fingered for breaking a hose bib on the water fountain by attempting to turn it on before it was operational.

Thatcher’s streets crew easily repaired the damage, but the town has discontinued use of the park until all the side work is finished because of the indiscretion. 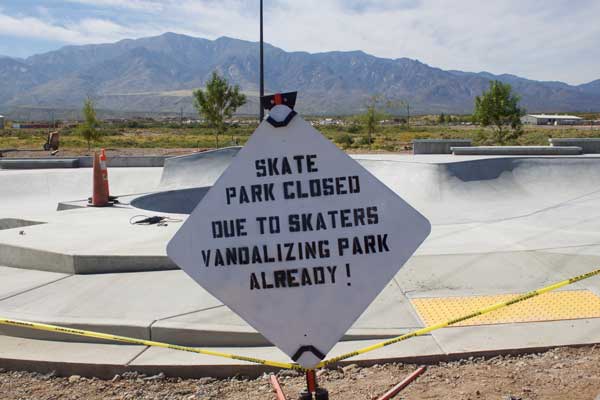 The rules for the skatepark mirror the rules for all of Thatcher’s parks, and include a prohibition on the consumption of alcohol or tobacco, profanity and the use of glass containers, among other rules.

“The two biggest things are probably the foul language and the smoking, because we want all ages to be able to use it,” Hinton said. “We want to make it a real family-friendly place and make it a good experience for everybody.”