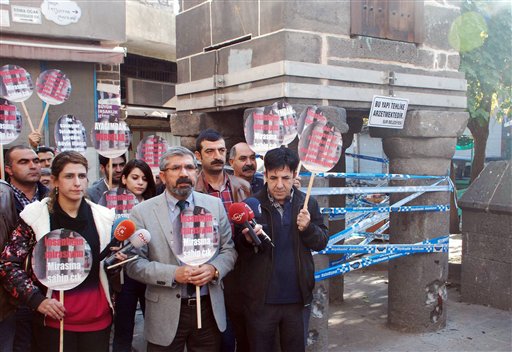 Tahir Elci, the head of Diyarbakir Bar Association, front centre, speaks to the media shortly before being killed in Diyarbakir, Turkey, Saturday, Nov. 28, 2015. Elci, a prominent lawyer, who faced a prison term on charges of supporting Turkey's Kurdish rebels, was killed in attack in Diyarbakir. Elci was shot on Saturday while he was making a press statement in front of a historical mosques damaged during fighting between Kurdish rebels and security forces. Elci holds a placard that reads: " Let's protect humanity heritage." (IHA agency via AP) TURKEY OUT

ANKARA, Turkey (AP) — A prominent lawyer and human rights defender, who faced a criminal charge for supporting Kurdish rebels, was killed Saturday in an attack in southeast Turkey in which a police officer also died, officials said.

Tahir Elci was shot while he and other lawyers were making a press statement. Two policemen and a journalist were also injured.

It wasn’t immediately clear who was behind the attack and there were conflicting reports about what led to it.

Interior Minister Efkan Ala and other officials said the assault was against police officers, and that Elci died in an ensuing clash. However, the Diyarbakir Bar Association said the lawyer, who was Kurdish, was the target of the attack.

Elci, 49, was the head of the bar association in the mainly Kurdish city and a human rights activist.

He was briefly detained and questioned last month for saying during a live news program that the Kurdistan Workers’ Party, or PKK, is not a terrorist organization. Soon after, he was charged with making terrorist propaganda and was facing more than seven years in prison.

Turkey and its allies consider the PKK to be a terrorist organization, and the government has stepped up attacks against it in recent months. The PKK has been fighting for autonomy in southeastern Turkey since 1984.

Ala said the attack began with two people firing at police from an area some 100 meters (109 yards) away from where Elci was speaking. A policeman died in that attack. Ala said Elci died soon after in a clash between the police and assailants.

Davutoglu vowed to find the culprits through a “transparent” investigation and promised no cover-up.

A government official said four inspectors have been assigned to investigate the case, adding that the government was “determined to shed light” on the attack.

He said authorities believe that Elci was caught in the crossfire, but were not ruling out “the possibility that a third party directly targeted him.” The official cannot be named because he was not authorized to speak publicly on the issue.

Elci had said through his Twitter account that he had received death threats because of his televised comments in which he defended the rebels.

Authorities declared a curfew in the Sur neighborhood where the attack occurred — a scene of frequent clashes between security forces and Kurdish youths.

Protests later broke out in Diyarbakir and elsewhere denouncing the killing.

In Diyarbakir, police used pressurized water against a group of protesters who hurled rocks and fire crackers. Police also dispersed hundreds of people who had gathered in central Istanbul chanting: “We are all Tahir, we are all Elci.”

At the time of the attack, Elci and other lawyers were making a statement about the destruction caused to a historic mosque by the clashes in Sur. Elci had strongly advocated an end to the renewed violence between the PKK and security forces.

The U.S. Embassy expressed shock over Elci’s death, calling him a “courageous defender of human rights.”

“Our condolences go to his family, that of the policeman killed and to all of Turkey. A terrible loss,” the embassy said on Twitter.

Elci was the lawyer for Mohammed Rasool, a journalist who has worked for The Associated Press and other media organizations. Rasool was arrested in August in Diyarbakir while reporting for Vice News.