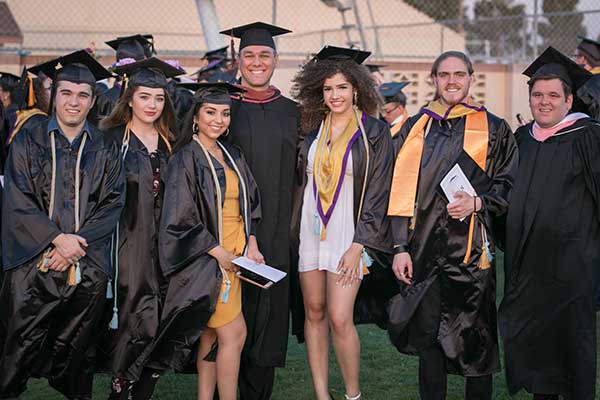 THATCHER, Ariz. — Eastern Arizona College honored the Class of 2018 – the largest in its 129-year history – at a commencement held on May 11. College faculty and staff, elected officials, and friends and families of the graduates filled John Mickelson Stadium to celebrate this event.

In addition to the traditional academic ceremony, the audience received comments from a number of individuals, including EAC President Mark Bryce who welcomed the gathering and George Lord, president of the EAC Alumni Association & Foundation, who welcomed EAC’s newest alumni to the association.

Dr. Maria Harper-Marinick delivered the commencement address. Originally from the Dominican Republic, Dr. Harper-Marinick arrived in Arizona in 1982 as a Fulbright Scholar to complete graduate work at Arizona State University. A strong advocate for access, equity and student success, she currently serves as Chancellor of the Maricopa County Community College District, one of the largest community college systems in the nation, which serves nearly 200,000 students with the support of 10,000 faculty and staff members across ten colleges. Considered a national leader in higher education, Dr. Harper-Marinick’s speech included a poignant message about humanity and the value of education, “Only an informed, thoughtful, tolerant people can develop and maintain a free society.” She went on to say that we live in times of complexity and turmoil and that now, more than ever, education is about knowledge, understanding, and becoming responsible individuals.

Teldon Larson represented the Class of 2018. Originally from Eagar, Arizona, Larson earned a 4.0 grade point average while attending EAC and received an Associate of Science degree. A member of Phi Theta Kappa and EAC’s Engineering Club, he received EAC’s Outstanding Sophomore Physics Award and leaves behind a legacy of hard work and accomplishment. Larson’s speech reminded students to start each day with a task completed, to not let perfect be the enemy of good and to respect everyone in an increasingly multicultural world.

Dr. Bruce Bishop, a retiring music professor and director of choral music, represented EAC’s faculty. Dr. Bishop began his career at EAC in 2001, bringing more than 20 years’ experience in music education. Students have praised him for his focus on professionalism and musicianship; his instruction and direction has always been of the highest caliber as he prepared students for continued study at university levels. In his address, Dr. Bishop explained that dreams come true with hard work and a forgiving heart. He closed by reminding the crowd that, “Whatever stones life may sling, we can moan or we can sing.”

The Class of 2018 included 617 candidates for graduation. Members came to EAC from all Arizona counties, twenty states and six countries, including Australia, Bulgaria, England, France and Germany. A total of 130 members graduated with honors, with 16 receiving highest honors, 52 receiving high honors and 62 receiving honors. They will go on to a broad range of occupational careers and to four-year universities to study business, engineering, education, finance, medicine, and much more.