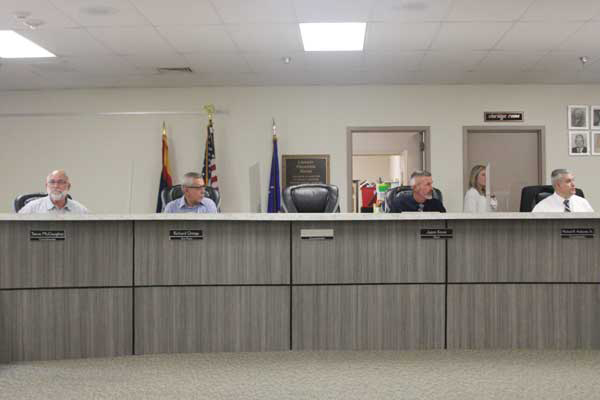 SAFFORD – Graham County Elections released the preliminary numbers from Tuesday’s primary election and it was incumbents taking the win.

In a posting to his Facebook page, Kouts said, “I am extremely honored to continue being the mayor of Safford and to accept the responsibilities that your trust has entitled me to. I am boundlessly grateful for the votes of the citizens who empowered me to continue to serve them and represent our amazing city of Safford.

“My life has forever been changed by being a small part of a fantastic team of influencers and leaders. I plan to continue to move our city forward.
As we contemplate these critical times, we will take what we’ve already learned and will continue moving forward and capitalizing on new opportunities. We will see the many projects that are in the pipeline finished and confront the issues that lie ahead, courageously and victoriously.

“I want to thank my campaign manager, and my family and friends for their unending support.”

In the Safford City Council race, with three seats up for grabs, incumbents Richard Ortega and Michael Andazola were re-elected.

“I would like to say, ‘Thank you’ to the citizens of Safford for their votes. I’m looking forward to working for them the next four years and working for community,” Andazola said.

Ortega was the race’s top vote-getter, with 1,028 while Andazola was second with 932.

However, the third City Council seat remains up in the air. Brad Hemphill was the third-highest vote-getter with 787, Dusti Branter right behind at 721.

Hannah Dudstedt, Graham County Elections director, said there are 56 provisional and about 350 early ballots that remain to be counted.

At the county level, the only challenged primaries were both Republican – Supervisor for District 2 and Sheriff.

Howard described himself as “numb” after getting the news of his victory.

“I’m excited and I’m numb. I’ve worked for last five years to have this opportunity. I’m super excited and I can’t wait to be a supervisor for this whole county. I had support that I couldn’t believe. I congratulate my opponents. they ran a great race. And, like I said, I’m just numb,” Howard said.

In the party races for the congressional district that represents Graham and Greenlee counties, incumbent Tom O’Halleran is leading challenger Eva Putzova, 58.8 percent to 41.2 percent in the Democratic primary, with 49 percent of the precincts reporting as of 6:30 a.m. Wednesday.

On the Republican side, Tiffany Shedd is leading Nolan Reidhead, 54.2 percent to 45.8 percent, for the right to be on the ballot in November.

Editor’s note: This story was updated at 6:40 a.m. Wednesday, Aug. 5, 2020, to include updated information on the congressional primary races.