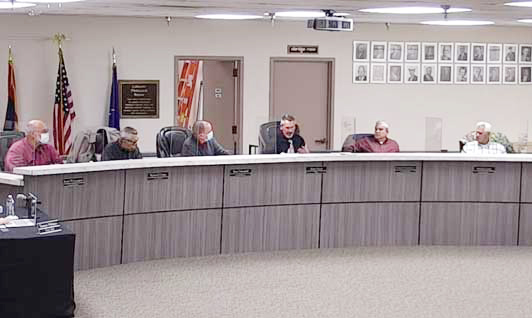 During a work session Monday and led by Mayor Jason Kouts, third from right, the Safford City Council directs staff to include limits on the use of cartoon characters on windows of recreational marijuana retailers in an ordinance that would authorize marijuana sales. - Contributed Photo

SAFFORD — As cities and towns prepare for the sale and recreational use of marijuana, Safford Mayor Jason Kouts said he wants to make sure retail outlets are using the proper marketing techniques to reach the appropriate consumers.

“I think we should, at least, be talking about: Are we OK with cartoon characters being used? If there’s a place down on, for instance, our (Downtown) District area — Main Street — advertising recreational use of marijuana, like a cactus or something like that up there?” Kouts said.

The other members of the City Council agreed with Kouts and, during Monday’s council work session, directed staff to include limits on use of cartoon characters on windows of marijuana retail establishments in the proposed ordinance authorizing the sale of recreational marijuana. That proposed ordinance is expected to come before the council in February.