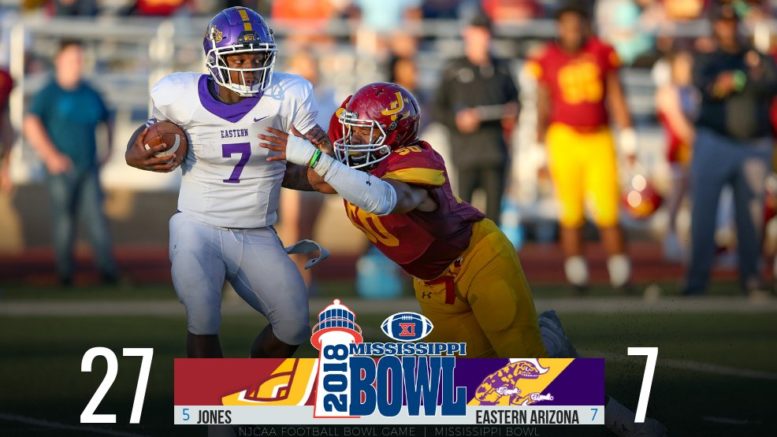 PERKINSTON, Miss. — Defense and special teams paved the way for No. 5 Jones College in its 27-7 victory over No. 7 Eastern Arizona at the 2018 Mississippi Bowl.

The Bobcats (10-2) held the vaunted rushing attack of the Gila Monsters (9-3) to 101 yards on the ground and piled up five sacks and 19 tackles for loss.

Cristofer Thompson opened the scoring for Jones with a 28-yard field goal at the 5:16 mark of the first quarter. Thompson would later crush a 46-yard field goal, and he went 3-for-3 to win the Offensive Most Valuable Player Award for the Bobcats.

EAC’s Keyshawn Lowe answered immediately, breaking a 68-yard of the option pitch on the next play from scrimmage and a 7-3 Gila Monsters lead. He ran 10 times for 100 yards to earn Offensive MVP honors for Eastern Arizona.

Kalyn Grandberry scored from 3 yards out early in the second quarter for Jones’ first lead of the game after an EAC penalty on a short field goal attempt gave the Bobcats’ drive new life. Thompson’s second field goal game with 3:27 left in the first half for a 13-7 lead.

Jones’ Nataurean Watts blocked a punt early in the second half which John David Rutherford recovered in the end zone for a 20-7 advantage, and the Bobcats added a late 4-yard run by Natorian Watts for the final margin.

Defensive end Marquez Bembry won Defensive MVP honors for Jones by piling up six tackles, including 4.5 for losses. He had a sack, forced a fumble and recovered a fumble, spearheading a defense that held EAC to 101 total yards. The Bobcats had two interceptions and recovered two fumbles.

Linebacker Trae’Von Hinton had seven tackles, with four for losses, to win the EAC Defensive MVP award. The Gila Monsters defense was stout, too, allowing just 205 total yards. They held the Jones rushing attack to 31 yards on 34 attempts and recovered two fumbles with one interception.

MACJC teams have won 10 of 11 Mississippi Bowl games, including the last six.