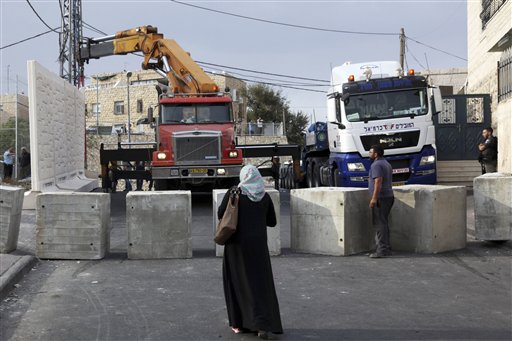 Palestinians watch a wall being built between Palestinian and Jewish neighborhoods in Jerusalem Sunday, Oct. 18, 2015. Palestinians in Jerusalem, more than one-third of the city's population, have awoken to a new reality: Israeli troops are encircling Arab neighborhoods, blocking roads with cement cubes the size of washing machines and ordering some of those leaving on foot to bare their torsos to prove they not carrying knives. (AP Photo/Mahmoud Illean)

JERUSALEM (AP) — Palestinians in Jerusalem, more than a third of the city’s population, have awoken to a new reality: Israeli troops are encircling Arab neighborhoods, blocking roads with concrete cubes the size of washing machines and ordering some of those leaving on foot to lift their shirts to show they are not carrying knives.

The unprecedented clampdown is meant to halt a rash of stabbings of Israelis. Many of the attacks were carried out by residents of east Jerusalem, the sector captured and annexed by Israel in 1967 and claimed by Palestinians as a future capital.

Prime Minister Benjamin Netanyahu’s government has portrayed the measures as temporary, in line with what his advisers say any police department in the U.S. or Europe would do to quell urban unrest. But some allege he is dividing Jerusalem, something Netanyahu has said he would never do.

Arab residents, who have long complained of discriminatory Israeli policies, say the latest closures are bringing them to a boiling point and lead to more violence.

“They want to humiliate us,” said Taher Obeid, a 26-year-old janitor at the Hebrew University of Jerusalem. He spoke over the din of car horns, as drivers stuck at one of the new checkpoints vented their anger.

Domestic critics say Netanyahu — long opposed to any negotiated partition of Jerusalem into two capitals — is effectively dividing the city along ethnic lines with his security measures.

“The great patriots … who don’t go to bed at night before praying for a unified, undivided, greater Jerusalem, are now proposing to dissect it, divide it and return it back 48 years in time,” commentator Nehemiah Strassler wrote in the Israeli daily Haaretz.

Some warn that recent events — a rise in “lone wolf” attacks by Palestinians and Israeli crackdowns — offer a taste of the constant hate-filled skirmishes that would likely prevail for years if there’s no deal on setting up Palestine next to Israel.

They say that due to the growth of Israeli settlements, the land between the Mediterranean and the Jordan River has effectively become a binational entity, with Israel ruling over several million Palestinians.

“This is what the future looks like,” said Jerusalem expert Daniel Seidemann. “It’s the one-state reality.”

While Netanyahu has said he supports the establishment of a Palestinian state, there has been no progress in peace efforts during his six years in office, and expectations of a negotiated agreement have faded.

Israel continues to expand Jewish settlements in east Jerusalem and the West Bank, chipping away at territory sought for a future Palestine. Netanyahu says he wants to negotiate with Palestinian President Mahmoud Abbas, but under tougher Israeli ground rules, with east Jerusalem off the table. Abbas refuses to engage under such conditions.

U.S. Secretary of State John Kerry is meeting with both leaders separately in coming days to lower the temperature, but there is no sign the Obama administration will try another mediation mission after Kerry’s failed attempt last year.

Netanyahu, meanwhile, rejects the notion that Palestinian attackers, including those in Jerusalem, are driven by anger over decades of Israeli rule.

He blames what he calls incitement to violence against Israel by Abbas and Palestinian Muslim leaders, including claims that Israel plans to erode Muslim-only prayer rights at a major Jerusalem shrine revered by Muslims and Jews. Netanyahu denies he intends to change the status quo, though senior coalition members have been pushing for Jewish prayer rights at the site.

“With respect to the Palestinian population (in Jerusalem), Israel has a lot of work to do, as it does with the social needs of its Jewish population,” senior Netanyahu adviser Dore Gold told The Associated Press. “But the primary problem here are the deliberate lies being spread” about the shrine, he said. The site is known to Jews as the Temple Mount, or home of their biblical Temples, and to Muslims as the Haram as-Sharif, marking the spot where the Prophet Muhammad ascended to heaven.

“Israel has no interest in creating divisions in Jerusalem,” Gold said of the dozens of road barriers that went up late last week. Israel “has a right to use the same security measures which every other city facing urban rioting has used,” he added, suggesting the measures could be rolled back.

The eastern part of the city, annexed by Israel after the 1967 war, has become a jumble of Arab and Jewish areas, a result of Israeli settlement policies over the years. This included building sprawling Jewish neighborhoods on annexed lands and permitting militant settlers to move into heavily guarded enclaves in Arab neighborhoods, such as the Muslim Quarter of the walled Old City. Palestinians make up 37 percent, or 316,000, of Jerusalem’s total population of 850,000.

Palestinians say they have suffered years of official discrimination, such as severe restrictions on building rights and the threat of residency rights being revoked if they move to the West Bank because the housing shortage in Arab areas.

Meanwhile, Israel’s West Bank separation barrier slices through Arab neighborhoods, leaving one-third of Jerusalem’s Arab residents on the “West Bank side” and making it harder for them to reach jobs, schools and hospitals.

In the past month, nine Israelis have been killed in Palestinian attacks and 41 Palestinians have been shot and killed by Israelis, including 20 labeled as attackers.

That has led to Israeli troops setting up even more dividers. They have blocked roads to and from Arab neighborhoods with concrete cubes, forcing cars to squeeze through a few crossing points. There, soldiers stop each vehicle, ask for IDs and demand that some drivers and passengers lift their shirts and roll up pants legs to show they are not armed.

Around midday Saturday, several dozen cars were held up at a checkpoint on the outskirts of the Issawiyeh neighborhood. The atmosphere was tense, with drivers honking and some saying they’d been stuck in line for more than two hours. Police were on edge, traded curses with the crowd; at one point, they threw a stun grenade into the line.

On Sunday, troops set up six concrete slabs, each about 5 meters (16 feet) tall, between the Jewish neighborhood of Armon Hanatziv and the adjacent Arab area of Jabal Mukaber, home to some recent attackers. Police said the barrier is meant as a shield against stones and firebombs.

In the past, similar obstacles billed as temporary have become permanent.

The Qalandiya checkpoint between the West Bank and east Jerusalem, one of the main crossings through the separation barrier and a frequent bottleneck, started out 15 years ago as a roadside concrete cube manned by a few soldiers. Today, it is a terminal with five lanes for pedestrians, fortified by barbed wire and watch towers.

Gold, the Netanyahu adviser, played down the extent of Palestinian frustration in the city, saying it is possible to create “patterns of co-existence and dialogue” once violence has subsided.

Seidemann said Jerusalem is a binational city that has remained divided, even after 1967, and that Israel’s latest security measures have simply given a physical expression to those rifts.

Israel’s hard-line leaders “can’t possibly look this in the eye because they are committed ideologically to a mythical, united Jerusalem that does not exist in nature,” he said.