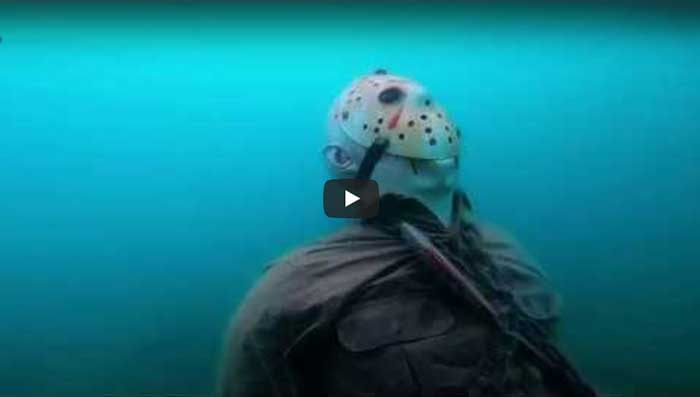 A life-size statue of Jason Voorhees, the supernatural killer from the Friday the 13th movie franchise is apparently sitting at the bottom of Lake Pleasant in Peoria, Arizona. A video of the statue on social media went viral, drawing national attention.

The statue was apparently put in the lake back in May, 2018. While the existence of the statue has been well-known in the local diving group, Maricopa County Parks officials only heard about it in September. After viewing a video of several divers swimming around the statue, parks officials are working to retrieve the statue as well as other items that have been placed underwater by divers.

An article in the New York Post claims the statue has been removed by park officials, but other reports say that Jason is still submerged in the lake. Due to dredging of the lake for trash removal, the statue was apparently moved to a different location at a lower depth in order to maintain a safe distance underwater for visitors on the surface of the lake.

The statue was created and placed in the lake by Zachary Nagy. Nagy said he placed the statue in Lake Pleasant on May 19th. He says it’s just one of many items at the bottom of the lake, which include a poker table, chairs, four prop skeletons and a Volkswagen. It’s unclear what penalties Nagy may face is park officials want to pursue charges.

Putting Jason in lakes seems to be a popular pastime. A 2014 YouTube video shows another Jason statue placed at the bottom of Camp Crystal Lake in Minnesota. The video description says, “A Jason Voorhees statue built and planted in the Louise mine pit in Crosby MN. Planted in 2013. The statue was built and planted by my good friend and dive buddy, Doug.”