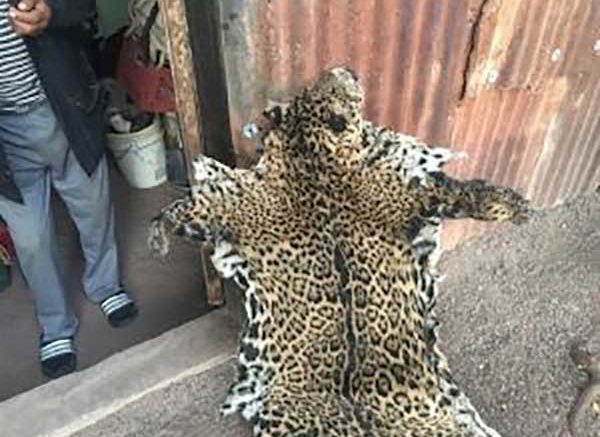 PHOENIX – A photograph analyzed by the Arizona Game and Fish Department confirmed that the last jaguar to venture into Arizona was killed recently in Mexico.
A photo of a jaguar pelt, sent by the Northern Jaguar Project, was independently analyzed by six Arizona Game and Fish (AZGFD) biologists to see if the pelt’s spot patterns match photographs of a cat last seen in Arizona in May 2017. All six biologists concluded it was the same cat.
“We are saddened to report that this was the so-called ‘Huachuca cat’ that was seen in Arizona in late 2016 and early 2017,” said Jim deVos, AZGFD assistant director of the Wildlife Management Division. “We still don’t know when, where or why it was taken, but it’s a loss we’re all feeling.”
Like human fingerprints, every jaguar’s spots form unique patterns, and by isolating and reviewing photos of the spot patterns, AZGFD biologists were able to find exact matches between photos of the pelt and trail camera photos taken when the lone male jaguar crossed into the United States some 18 months ago.
Jaguars are only occasional visitors to Arizona and no female jaguar has been seen in the U.S. since the 1960s. No jaguars are currently reported in Arizona, and according to deVos, there is little likelihood they could ever re-establish a presence here.
“Historically, jaguars used the free-flowing rivers of southern Arizona as their migration corridors,” said deVos. “Today, those rivers are dry and home to increased human development. Even the Sky Island habitats are too fragmented to establish a jaguar population. Males may visit, but when they find no females here, they return to Mexico.”
Arizona may now be too populous to provide good jaguar habitat, but AZGFD remains committed to helping conserve this important species. The Department works closely with Mexican scientists and wildlife officials throughout the Americas to collaborate, study and conserve jaguars populations. In fact, at the “International Jaguar and Wild Felines Symposium” last month in Cancun, Mexico, AZGFD was the only U.S. entity invited to attend.
“Arizona is on the far northern edge of jaguar territory, and not many actually come here, but we still recognize jaguars as an important species that must be conserved and protected,” said deVos.