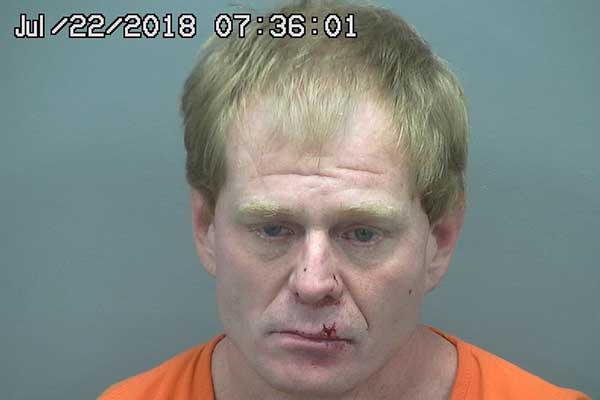 SAFFORD – Saturday night, authorities were dispatched to the 600 Block of 6th Avenue in reference to a hit a run collision. The reporting party stated that he works at Shane’s Place, and had been inside a few hours. No one was parked by him when he arrived, but he came outside when someone informed him that his truck was hit. The employee said that another male came inside that was intoxicated and saying he was associated with the Hell’s Angels group and other things. The man was belligerent and was asked to leave. A few minutes later a vehicle was heard spinning tires and leaving in a rapid manner. The employee gave a description of the man.

The officer observed and photographed the damage that had occurred to the truck, as well as damage done to a Mustang parked nearby.

Later that night, Graham County deputies were called to the area of Cluff Ponds in reference to a disorderly man threatening and trying to fight people. One of the reporting parties, stated the man told them he had been kicked out of Shane’s Place already that night. Due to the recent time period and information given, the responding officer headed to Cluff Ponds and found deputies had a male, later identified as Keven Gerstenmier, who’s description matched the one given by the reporting party earlier at Shane’s Place. The officer also noticed the fresh damage to the passenger side rear bumper of Gerstenmier’s SUV. When asked if he had been to Shane’s Place that night, Gerstenmier stated he had only been from his house out to Cluff Ponds. The officer also observed a strong odor of an alcoholic beverage on his breath, and had blood shot watery eyes.

The group at Cluff Ponds said that Gerstenmier had driven up to the area at a high rate of speed, bumped up onto the boat ramp where he barely came to a stop before hitting the water. Gerstenmier then offered the group some alcohol, which they turned down. Gerstenmier apparently tried to get in one the group member’s vehicle and had to be pulled out. The group moved to the other side of the pond to avoid problems, but Gerstenmier followed them and continued his aggressive behavior. When he got out of his vehicle he allegedly walked up to a man in the group and raised bottle over his head as though he was going to hit the man with it. The man pushed Gerstenmier away, causing him to fall and hit his head on his vehicle. The man then put Gerstenmier in a head lock to prevent Gerstenmier from hitting him. Gerstenmier reportedly said, “we’re cool,” and the man released his hold.

Gerstenmier allegedly struck one the men in the chin and told him that he was Hells Angels. Throughout his interaction with the group he repeatedly referred to Hell’s Angels and asked members of the group if they knew what “HA” (Hells Angels) was.

A female member of the group reported that Gerstanmier had pushed her, trying to provoke a fight.

When the group again tried to leave the area, Gerstenmier reportedly chased them and threw a spear at one of the cars. One of the group members stopped to confront Gerstenmier and reportedly struck him in the face and pushed him to the ground. When Gerstenmier tried to stand up, the man struck him again and told him to stay down. Gerstenmier told them that the Hell’s Angels were coming and were going to kill them.

Gerstenmier told authorities that there were some kids fighting at the pond and that he had tried to break it up. He pointed to his upper lip where he had a laceration that was bleeding and stated that the kids had pushed him to the ground and put rocks on his face. According to the police report, Gerstenmier smelled strongly of alcohol.

Gerstenier was placed under arrest for DUI and handcuffed with his hands behind his back. He was placed in the back seat of a police vehicle and secured with a seat belt. During transport to the jail, Gerstenmier removed the seat belt. The officer stopped, secured the seat belt again and ordered Gerstanmier to stop taking it off. While driving, Gerstenmier again removed his seat belt and started smashing his head against the cage in the patrol vehicle. He started screaming that the officer was punching him. The officer told him that everything was being recorded and that nobody was hurting him. Gerstenmier was placed in a hobble to prevent him from slipping his handcuffs and hitting his head.

After the car door was shut and prior to leaving, Gerstenmier slipped the hobble and kicked the window several times. He was restrained again and seat belted in. When the officer started driving, Gerstenmier said he was having an asthma attack. He started to cough and spit blood on the floor of the patrol vehicle. The officer stopped the car and Gerstenmier leaned out of the vehicle, trying to throw up and spitting blood. Other officers stopped, removed Gerstenmier from the vehicle, placed him on the ground, and called for an ambulance. One of the deputies noticed that Gerstenmier was shaking but breathing fine. An officer pointed out that when people have seizures they don’t breathe. Gerstenmier then held his breath and started to shake again.

The ambulance arrived and transported Gerstenmier to the hospital. He continued to act as if he was having seizures. The Life-line personnel stated that he was not having a seizure.

After Gerstenmier was discharged from the hospital, deputies transported him to the Graham County Jail where he was booked for assault and disorderly conduct. It was also learned that he was driving on a suspended license.