The first annual Graham Blues Fest is scheduled for Saturday, June 2, 2018 at the Graham County Fairgrounds in Safford. The event will feature fine blues music, food, and a beer garden.

The inaugural event will feature some of Arizona’s best blues bands. The festival kicks off at 10:00 A.M. and will feature live entertainment until 9 P.M. Reed Richins from Double R Sound will be providing sound systems for the event. “We are excited to have a combination of local talent, regional talent and Arizona Blues legend, Chuck Hall headline the show,” Richins said.

The Chuck Hall Band creates art in the form of music. The recipe they use is simple: Start with blues that’s so greasy it clogs the arteries in your ears. Stir in generous portions of refined talent and raw passion, add a dash of showmanship sprinkled with a touch of salty humor and cook on high heat until it smokes. Serve steaming hot. The result is a spicy musical feast that satisfies and always leaves you wanting more. The rhythm section of the band is comprised of John Willis on bass and vocals along with Ron James on drums and vocals. The trio is rock solid and precise and is the perfect complement to Chuck’s raw, in-your-face guitar style.

Chuck Hall has been a mainstay in the Phoenix music scene for over 30 years. Born in Louisiana and raised in Texas, he began playing at age 10 and played in a number of bands in the Dallas area in the 70’s and 80’s. Hall arrived in Phoenix in 1984, and after a two-year stint with Texas Red and the Heartbreakers, he formed Chuck Hall and the Brick Wall, which would firmly establish him as a musician, songwriter and showman. 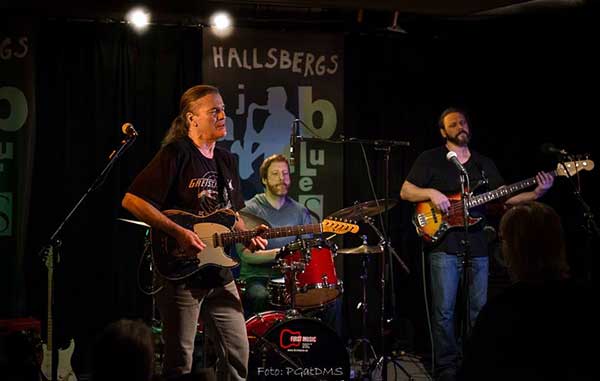 The Bad News Blues Band has been gaining a reputation for house burning live performances all over the United States as well as Canada, Mexico, Turkey, Romania, Ireland, the U.K. and even Moscow Russia! With their latest ARV Records release, “Still Cadillacin'” produced by Richard Medek and mixed by Teddy Morgan, they’re set to hit the road and spread the word with the fire and intensity that their live shows are renowned for worldwide.

In the thirteen years since the band was formed they have won many local and regional awards including first place in the 1997 and 2002 Arizona Blues Shootout. Winning the shoot out earned them a spot at the International Blues and talent competition in Memphis Tennessee sponsored by the Blues Foundation. The band has the distinct honor of being the first blues band ever to be added to the artist roster for the Kennedy Center for Performing Arts.

After touring at length with Texas guitar legend Long John Hunter, The Bad News Blues Band is making a name for themselves with upcoming performances, club dates and festivals across the country.

Blues Berry Jam Too – a local band comprised of Dave Stock on guitar and vocals, Bernie Tellez on bass guitar, and James “Red Dog” Gardner on drums. The group took second place in the 2014 Battle of the Bands competition.

Graham County Chamber of Commerce Executive Director, Patrick O’Donnell told Gila Valley Central that the Chamber of Commerce is trying to have four events throughout the year; bigger events to draw outside people in, as well as entertain the local community. The chamber’s purpose is to support local business and to support and create events to bring in tourism dollars. The chamber has been been studying what type of events can best accomplish that goal. O’Donnell says that they know that Blues Festivals are popular. There’s been one in Bisbee for decades. Silver City also hosts a popular blues festival, so it made sense to start one here.

The weekend before Memorial Day weekend there’s a big blues festival in Madrid, NM. The Silver City Blues Festival is the following weekend – Memorial Day weekend. Two weeks later there’s one in Flagstaff and the week after that, there’s one in Alpine. O’Donnell says the local event planned for June 2, 2018 fills in the weekend after Memorial Day. He hopes to create a blues circuit that people can follow each weekend, starting in Madrid, NM and ending in Alpine.

The Graham Blues Fest will be held at the Graham County Fairgrounds on the soccer field complex. “It’s ideal for a festival,” says O’Donnell, “because you have two side-by-side soccer fields plus some additional lawn space. There’s a built-in fence on one side. The area where the stage will be set up is elevated about three feet above the grassed area. The area is equipped with bathrooms and some porta potties will also be brought in. The area is adjacent to the covered play area for kids.”

In addition to great blues music, the event will have three slide castles for the kids to play on. One of them will be a wet slide so kids will be able to play and cool down in the water. The slides will be located close to the covered play area. “The whole idea,” says O’Donnell,” is a family-friendly event. There will be lots of space.”

Chairs, blankets and pop-ups are allowed but the pop-up area is behind the area for chairs and blankets. No coolers are allowed at the event.

There will be a dry camp area for people who may be coming in their RVs. The Chamber of Commerce has also negotiated discounts for rooms at SpringHill Suites in Thatcher, Quality Inn and Suites and Comfort Inn and Suites in Safford. Just mention “Graham Blues Fest” when making your reservation. Quality and Comfort Inns will be providing shuttle services to and from the event for their guests.

Tickets for the event are $20 at the gate or $10 if you pre-order. VIP tickets are also available. There will be a VIP area with air-cooled tents, upgraded porta potties, meals, tables and cold drinks. VIP ticket holders will also get a commemorative shirt and poster. Tickets can be purchased online here:

The event is sponsored by: