Don’t be fooled by the white-throated wood rat with its big, brown eyes, petite round ears and fluffy snout.

This seemingly innocent ball of fuzz is a Southwestern menace. And it can cost you.

The packrat, or the Neotoma albigula as they are called, can do thousands of dollars of damage to cars and homes, even in a single night. They can be infuriatingly devious, and for many homeowners the thought of feeding it to a rattlesnake is not only appealing but in some cases practical, assuming you own a rattlesnake.

But in general terms, humans and packrats do not play well together.

Packrats often settle their nests under the hoods of in cars, in large piles of wood or garbage, and even in attics and cactuses.

In one instance, a man from Tucson had $6,000 worth of damage done to his Toyota Tundra pickup. The culprit: a packrat.

Richard Wood, a private investigator who works on criminal justice cases, hooked up his horse trailer to his truck one day at his home in the Southwestern desert. As he started the vehicle, every display and light erupted into a chaotic cacophony.

Startled, he checked the car from hood to end and found that in the engine compartment, wiring insulation and whole undercarriage had been chewed through.

At the dealership, a technician found two dead packrats in the engine compartment. But the rats died on the job, chewing through wiring.

“Packrats are a huge problem in southern Arizona for destroying cars,” Wood said. “They’ve adapted to us moving into their environment.”

The packrat is indigenous to the desert and has adapted to live on the fringes of human settlements.   As urbanization spread across rural and desert areas, the pack rat scourge has become more pronounced, with the need for experts to deal with it increasing.

Enter Tucson’s own Kris Brown, A.K.A Mr. Pack Rat. He is one such expert.

He owns a business called, with some consideration bestowed to honor the rat, Mr. Pack Rat, which serves the local community as an “elimination” company that specializes in, you guessed it, packrats.

“I’m a big believer in niche companies,” said Brown, whose website brims with information on the whys, wherefores, cultural mores, environmental impacts and habits of the pesky packrat. To look at the wealth of appreciative information on the critter, you might think that Brown has a certain affection for packrats, even as he makes his living eliminating them. You would be right.

“I am amazed by them and their incredible abilities to find access points, to chew and generally to survive,” he said with admiration.

While packrats can be a nuisance, they are also an important factor of the desert Southwest ecology.

They have poor eyesight and are slow movers, which make them ideal meals for snakes, owls, bobcats and coyotes.

They live about two years and give birth to three or four offspring every six to eight weeks, which is arguably a pretty good definition of “prolific.” They obtain all the liquid they require through the food they eat, so they do not need to be close to water.

Packrats are the homesteaders and hoarders of the desert animal kingdom.

“What makes them such destructive creatures is that they’ll use the same nest site for generations,” Brown said.

Packrats usually live alone, with one adult per nest. The nests are full of nature’s leftovers. They can contain sticks, rocks and cacti pieces, among anything else the little creatures can get their paws on.

Brown says he’s even found Army men (the little toy ones that is), and Whiffle balls among the sticks and twigs in the nests and jokingly adds that pack rats like to play games too.

Within homeowners inner sanctums, packrats collect toys from all the little boys and girls who are unfortunate enough to leave their prized possessions outside.  Brown adds that packrats “don’t need or depend on people, and will continue to live after people.” However, they do seem to enjoy our stuff.

Not only do they affect human habitats, but natural ones too. And in this instance, their impact is beneficial.

They act as the desert landscape’s natural tiller because their nesting upturns the soil, leaving a nutrient rich area when they move to a new nesting site.

“It is its own little rich environment of life,” Brown said.

With the packrat’s ability to make any protected nook of human habitation a rat haven, prevention becomes the name of the game for homeowners on the fringes of Tucson’s city limits.

To keep a vehicle from becoming a packrat hotspot, Brown recommends that rat traps are best for catching the little rodents.While there are many possibilities for annihilating packrat nests, there are several things to avoid. Don’t use poison bait, strobe lights, mothballs, ivory soap and dryer sheets. With more bizarre ones can be gum and even chili powder.Other ways to keep cars safe from pack rats is a well-sealed garage, open spaces around vehicles, zero clutter, an open hood and bright utility lights. Rats do not like lights. 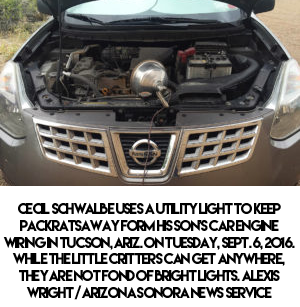 Save your money, Mr. Pack Rat advises. He said he has found that strobe lights make no major difference in keeping the packrat away from homes and cars.  He has the evidence to prove it. Brown explains that he had a packrat in captivity in a terrarium and filmed it with an infrared camera. When he added a strobe light to the terrarium, there was no change in the rat’s behavior.  The packrat groomed normally, showed no signs of distress and in fact even climbed on top of the light and plopped itself down.

Purchasing the lights “do no harm, but they also do no good that I can see,” Brown said. “We have had many customers try the lights — and still have issues with rats in the car.”

Since none of these things work, who you gonna call? Well, Mr. Pack Rat says it is better to call a professional and let them deal with the animal than attempting a funky home remedy that is more likely to attract other uninvited desert critters.

On the other hand, there are those who welcome packrats. Local exotic animal owners, for example.

Former Arizona state herpetologist and environmental biologist, Dr. Cecil Schwalbe, who lives on the east side of Tucson near Saguaro National Park, is glad to receive a packrat. Under a license as a certified wildlife expert, he has a 50-year-old six-foot rattlesnake named Big Guy, and Big Guy’s favorite meal is a nice, fat pack rat. Being an elderly gentleman, as Dr. Schwalbe describes his reptile friend, Big Guy only needs to eat one packrat to keep his belly full for quite some time.

However, the rattlesnake bite is not just a bite that leads to the pack rat’s quick demise. With years of evolution, it can take 2 to 3 hours for the critter to succumb to the venom, Schwalbe says.

To prevent the packrats from getting access to his vehicles during the night, or the ones kept outside at least, Schwalbe keeps the hood of the car open with a bright utility light on the engine for the duration of the night time hours.

However, for some who have never seen packrats or do not know what the signs are, he notes that the one thing people can do is simple:

“Be observant to poop.”

After college, Alexis plans on going into publishing or business management. Born and raised in Vancouver, WA, she found herself in Tucson, AZ for school and her passion for baking and happy hour erupted into a full-blown addiction. You can usually find her testing recipes or scouring the city to find the best happy hour.