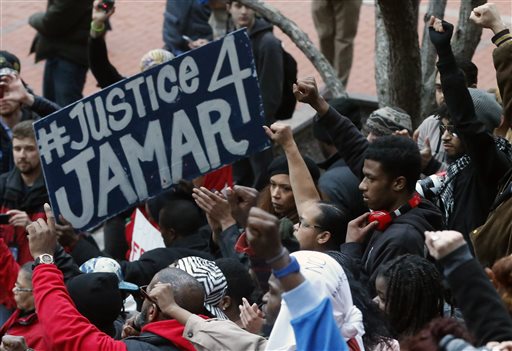 Demonstrators raise their fists in the air at the Government Center in Minneapolis on Wednesday, March 30, 2016, to protest County Attorney Mike Freeman's decision that no charges will be filed against two Minneapolis police officers in the fatal shooting of a black man, Jamar Clark, 24, in November 2015. (AP Photo/Jim Mone)

MINNEAPOLIS (AP) — Activists from Minneapolis’ black community spent four months demanding the release of videos and other evidence after a black man was fatally shot in a confrontation with two white police officers. When it finally was made public and a prosecutor announced the officers wouldn’t be charged, they were enraged.

Hennepin County Attorney Mike Freeman on Wednesday cleared the officers, saying forensic evidence backed their account that 24-year-old Jamar Clark was not handcuffed and was struggling for an officer’s gun when he was shot. Clark ignored warnings to take his hand off Officer Mark Ringgenberg’s gun, leading Officer Mark Schwarze to shoot Clark as the officers feared for their lives, Freeman said.

“Ringgenberg communicated to Schwarze that Clark had his firearm and that Schwarze should shoot Clark. Schwarze did. His actions were reasonable given both his observations and Ringgenberg’s plea,” the prosecutor said.

But Freeman’s detailed version of the events early on Nov. 15, and his release of the investigative documents, drew derision even at the news conference from activists who accused him of favoring police over the accounts of bystanders who said Clark was handcuffed when he was shot. Several of the critics were among those who maintained a protest encampment outside a police station for 18 days and led marches and largely peaceful protests across the Twin Cities area after the shooting.

“If we cannot find justice here, we will find it in the streets,” Mica Grimm, an organizer with Black Lives Matter Minneapolis, told reporters after Freeman’s announcement.

Nekima Levy-Pounds, president of the Minneapolis NAACP, vowed to keep pressure on police.

“We’re going to take to the streets. And we’re going to fight until we get what we came for,” Levy-Pounds said.

Protesters gathered Wednesday evening at the site where Clark was shot in north Minneapolis while others met at a park on the southern edge of downtown. The two groups met at the Hennepin County Government Center, where Freeman made his announcement earlier in the day, and the mixed-race crowd swelled into the hundreds. Several speakers addressed the group, which chanted and carried signs that said “Justice for Jamar” and “Black Lives Matter.” The crowd remained peaceful and its numbers dwindled as the night went on.

The question of whether Clark was handcuffed by the officers, who were responding to a report that he had assaulted his girlfriend and was interfering with paramedics, was central in the case.

Freeman said 20 civilian witnesses gave different versions of whether Clark was handcuffed. Two said he wasn’t, six weren’t sure and 12 said he was, but they disagreed on whether both his hands were cuffed and whether his hands were in front of him or behind his back. Freeman said none of the 10 paramedics and police witnesses who saw Clark right after the shooting saw him in handcuffs.

With conflicting accounts, Freeman said he relied on forensic evidence, including physical examinations that found no injuries or markings on Clark’s wrists that would have been consistent with handcuffs.

In an interview later with KSTP-TV, Freeman said activists who criticized his decision were speaking out of frustration. He again cited what he called “hardcore forensic evidence,” noting Clark’s DNA was found on the butt of Ringgenberg’s gun and all over his utility belt, supporting their account of a struggle.

The release of videos investigators had gathered was a key demand of the protesters last fall. However, only videos taken from the back of the ambulance showed much of the incident. Clark can be seen standing outside the ambulance. In the key segment, Ringgenberg can be seen in the top left corner taking Clark down to the ground. The shooting itself happened just off camera, but the officer can be seen getting up afterward and straightening his belt.

“That was murder,” Levy-Pounds exclaimed as she watched the video for the first time.

Mayor Betsy Hodges, Police Chief Janee Harteau, and Lt. Bob Kroll, head of the police officers’ union, all praised the thoroughness and transparency of the investigation. Freeman made the charging decision himself after initially planning to rely on a nonpublic grand jury process, and he posted more than 1,000 pages of investigative materials, videos and other evidence on his website.

“We now expect all members of the public to peacefully accept the process and outcome that exonerated officers Mark Ringgenberg and Dustin Schwarze,” Kroll said. “… I would ask the residents of Minneapolis to pause and reflect how we can move forward in a peaceful manner.”

A federal investigation is still pending into whether police violated Clark’s civil rights through excessive force. The Justice Department is also reviewing how the city responded to protests after Clark’s death.

Results of the investigation are posted at: http://www.hennepinattorney.org/news/news/2016/March/jamar-clark-decision