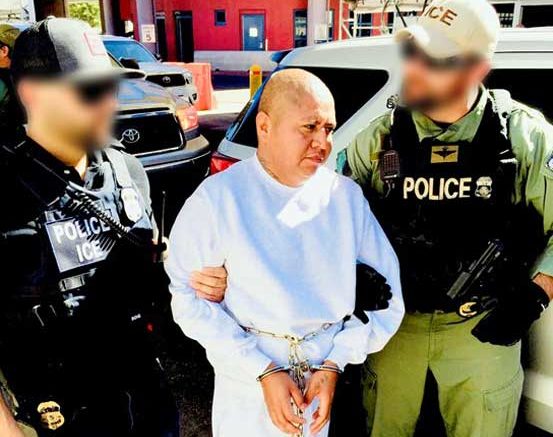 PHOENIX – A Mexican national wanted in his native country for kidnapping was deported Friday by U.S. Immigration and Customs Enforcement (ICE) Enforcement and Removal Operations (ERO).

Ibarra, a.k.a El Lino, has come into DHS custody several times. ICE removed him in 2006 following his conviction of illegal entry after serving 90 days in federal prison. In 2007, 2009 and 2011, he was removed by the U.S. Border Patrol (USBP), and most recently Ibarra came into ICE custody in September after a U.S. District Judge sentenced him to time served and supervised release for 12 months. Ibarra spent nearly one month in ERO custody before his removal Friday.

According to two Mexican arrest warrants issued by the Mexican Attorney General, Ibara, is allegedly involved in two separate kidnapping investigations that occurred in 2013 and 2016, both occurring in the state of Tulancingo de Bravo, Hidalgo, in Mexico.

“ICE is focused on identifying, arresting and removing public safety threats, as well as individuals who have violated our nation’s immigration laws, like this previously deported alien,” said Henry Lucero, field office director for ERO Phoenix. “Our communities are safer when foreign nationals who pose a threat to public safety are removed from the streets.”

ICE is focused on removing public safety threats, such as convicted criminal aliens and gang members, as well as individuals who have violated our nation’s immigration laws, including those who illegally re-entered the country after being removed and immigration fugitives ordered removed by federal immigration judges.

Since January, ICE arrests comprise over 70 percent convicted criminals. Of the remaining individuals not convicted of a crime, approximately 70 percent have either been charged with a crime, are an immigration fugitive, or have been removed from the United States and illegally re-entered – reflecting the agency’s continued prioritization of its limited enforcement resources on aliens who pose a threat to national security, public safety and border security.