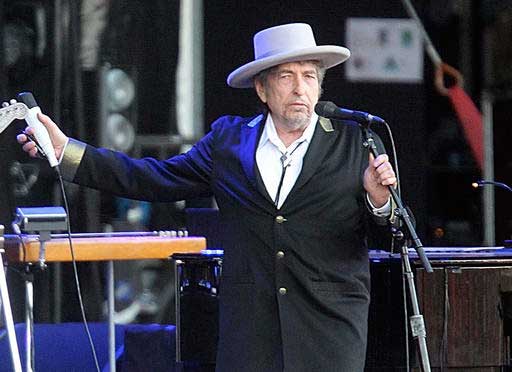 STOCKHOLM (AP) — Bob Dylan won the Nobel Prize in literature Thursday for expanding the poetic possibilities of music with a body of work that includes “Like a Rolling Stone,” ”Blowin’ in the Wind” and “Mr. Tambourine Man” — a stunning announcement that marked the first time the award has gone to a musician.

Reporters and others who had gathered at the Swedish Academy’s headquarters reacted with a loud cheer as the name of the singer and songwriter was read out.

Dylan, 75, is widely regarded as the most influential poet-musician of his generation.

His protest songs such as “Blowin’ in the Wind” and “The Times They Are A-Changin'” became anthems for the U.S. anti-war and civil rights movements of the 1960s. His densely poetic and image-rich “Mr. Tambourine Man” helped usher in the folk-rock movement. And his 1965 “Like a Rolling Stone,” about a rich and pampered young woman forced to fend for herself, was pronounced the greatest song of all time by Rolling Stone magazine.

Dylan is the first American winner of the Nobel literature prize since Toni Morrison in 1993.

The academy commended him for “having created new poetic expressions within the great American song tradition.”

Dylan rarely gives interviews, and a representative said the musician had no immediate comment. He is on tour and was scheduled to play in Las Vegas on Thursday night.

The announcement angered some literary figures but seemed to please far more.

Dylan’s impact on popular culture has been immense, his influence as a lyricist extending to nearly every major music figure and songwriter of the last 50 years, from the Beatles to Bruce Springsteen, Bono, Ed Sheeran and beyond.

Generally described as a rock musician, Dylan has employed numerous musical styles, including country, gospel, blues, folk and pop. He pursued them all, sometimes separately and other times simultaneously, sometimes baffling and even angering his fans.

His songs can be snarling and accusatory (“Idiot Wind,” ”Positively 4th Street”); apocalyptic (“Hard Rain”); dense and hallucinatory (“Desolation Row”); tender and wistful (“Visions of Johanna”); bracingly, ripped-from-the-headlines political (“Hurricane” and “Only a Pawn in their Game”); and enigmatic and absurdist (“Stuck Inside of Mobile With the Memphis Blues Again”).

Some of his songs are studded with historical, literary or political references (Jack the Ripper, Captain Ahab, Shakespeare, Paul Revere, T.S. Eliot and Fidel Castro) and laced with sly humor. (“Highway 61 Revisited” opens with the line, “Oh, God said to Abraham, ‘Kill me a son.’ Abe said, ‘Man, you must be puttin’ me on.'”

“Blowin’ in the Wind” captured the hopes of the ’60s civil rights movement, yet sounded as if it had been handed down through the oral tradition from another century, with lines like: “How many times must the cannon balls fly before they’re forever banned?”

With its rapid-fire rhymes, “Subterranean Homesick Blues” from 1965 is sometimes called one of the first rap songs.

Although Dylan had been mentioned in Nobel speculation for years, many experts had ruled him out, thinking the academy wouldn’t extend its more than a century-old award to the world of music.

They were wrong. The academy’s permanent secretary, Sara Danius, said that while Dylan performs his poetry in the form of songs, that’s no different from the ancient Greeks, whose works were often performed to music.

“Bob Dylan writes poetry for the ear,” she said. “But it’s perfectly fine to read his works as poetry.”

Danius told The Associated Press that a “great majority” on the 18-member Nobel panel voted for Dylan. She said her personal favorites among Dylan’s songs include “Chimes of Freedom” and “Visions of Johanna,” and suggested that people unfamiliar with Dylan’s music start by listening to his 1966 album “Blonde on Blonde.”

Writers, musicians and even heads of state commented on the Nobel academy’s choice on Twitter.

But Scottish novelist Irvine Welsh snarled: “I’m a Dylan fan, but this is an ill conceived nostalgia award wrenched from the rancid prostates of senile, gibbering hippies.”

Lyrics from scores of Dylan songs, such as “Blowin’ in the Wind,” ”Stuck Inside of Mobile With the Memphis Blues Again,” ”My Back Pages” and “It’s Alright Ma (I’m Only Bleeding),” have worked their way into the public lexicon over the years, even turning up remarkably often in legal opinions, as a recent study found.

In a measure of the literary esteem in which he is held, “The Norton Introduction to Literature,” a textbook used in American high schools and universities, includes the lyrics to “Mr. Tambourine Man.”

Born on May 24, 1941, in Duluth, Minnesota, Dylan grew up in a Jewish middle-class family.

By his early 20s, he had taken the folk music world by storm. From that time on, he would constantly reinvent himself — often enraging followers, particularly when he started playing electric rock — but would win them back and add new admirers.

His career was such a complicated pastiche of elusive, ever-changing styles that it took six actors to portray him in the 2007 movie based on his life, “I’m Not There.”

He won an Oscar in 2001 for the song “Things Have Changed” and received a lifetime achievement award from the Academy of Recording Arts and Sciences in 1991. In 2008, he was awarded a Pulitzer Prize for his contributions to music and American culture.

Dylan is the most unorthodox Nobel literature prize winner since 1997, when the award went to Italian playwright Dario Fo, whose works some say also need to be performed to be fully appreciated. By a sad coincidence, Fo died Thursday at 90.

The literature prize completed this year’s Nobel Prize announcements. The six awards, each worth 8 million kronor (about $930,000), will be handed out on Dec. 10, the anniversary of prize founder Alfred Nobel’s death in 1896.