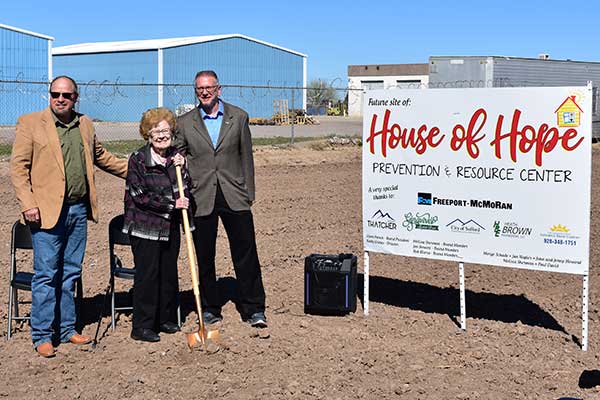 “John and Jenny Howard are the ones that have taken the ball and run with it. Without them, we wouldn’t be as far as we are with the sober living home,” said Kathy Grimes, executive director for the Graham County Substance Abuse Coalition. “It will house 14 men, and we’ll have a prevention and resource center there also.”

The House of Hope Sober Living Home has been in the works for more than two years, with financial contributions from Freeport-McMoRan and United Way of Graham and Greenlee Counties, as well as fund-raising efforts led by the Howards.

Land for the facility was donated by Marge Schade, owner of the local Pepsi bottling plant.

The home will help those dealing with addiction transition from a rehabilitation facility back into the community.

Despite the pending construction, Grimes said there remains a need for donations.