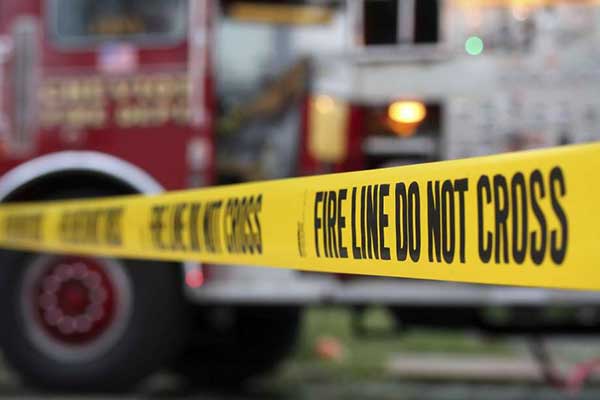 Graham County – Law enforcement and firefighters responded to a house fire on East Sanchez Road, Tuesday night. A Sheriff’s deputy arrived on the scene at about 10:45 p.m. and observed a small fire on the front porch of the residence and a woman standing in the road in front of the house.

The woman reported that the fire was in the back of the residence and her friend was trying to extinguish it. The deputy made contact with the man, who had severe burns on his hands. The deputy ordered the man and woman to back away from the house, then located a point of entry for fire fighters to enter the area.

The woman told authorities that she and her daughters had gone to the Safford park earlier but came back because of pan handlers begging for money. As the woman pulled up in front of her house, she saw smoke coming from the roof. She also noted that the front door was unlocked. The woman said that it was odd, because she always padlocks the front door and was sure she had locked it before leaving earlier. She stated that when she opened the door, the inside was filled with smoke. She panicked and went get help from a male friend.

The two returned to the residence and left the woman’s children in the car while they investigated the fire. They determined that the smoke was coming from the laundry room located at the back of the house. The man kicked in the back door and attempted to fight the fire with a garden hose while waiting for emergency crews to arrive. The man told investigators that he grabbed burning clothes from a clothes hamper and threw them out of the front door. He reported that he was likely burned by the hot plastic. He also reported that he kicked in the back door because it was padlocked shut. While fighting the fire with the hose, the man found a mother dog with puppies in the laundry room, which he quickly removed. The man said that there were burning clothes on top of the puppies.

While fire crews battled the blaze, the woman told authorities that she has been harassed for the past year-and-a-half by someone knocking on her windows. She also reported that she could not find the padlock for the front door. The woman said that someone had knocked on their window the previous night. She asked her daughter to check outside to see who was there. The daughter opened the door but didn’t see anyone. She reported that she heard someone in the distance say, “Hurry, let’s go!” The daughter also reported that the front door to the home was open when the family came home and found the residence on fire.

According to the police report, investigators were unable to find any shoe tracks in and out of the area. The padlock to the front door was found on the kitchen counter. Safford Fire Chief, Clark Bingham told the deputies that the fire was likely started by an old night light in the laundry room. Bingham pointed out that the V-shaped burned pattern in the laundry room started on the east side of the wall where there was a night light with a photocell. Bingham said that he believes the dogs may have pushed clothes against the photocell, causing the light to turn on. The bulb may have gotten so hot that it shorted out, igniting the clothes.