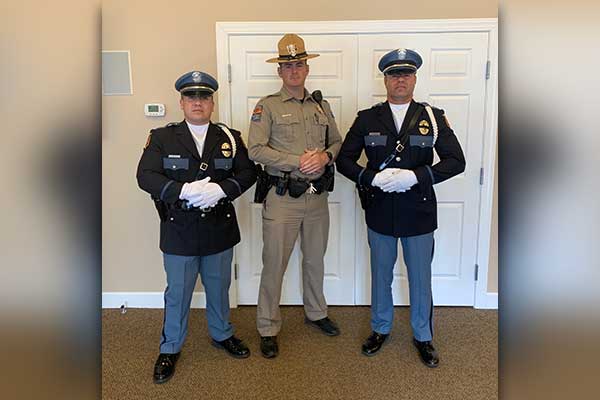 An honor guard has been keeping a 24-hour vigil at Vining Funeral Home where the body of El Paso detective, Richard Allbee, has been since he was killed in a head on collision on Highway 70 near Bylas, AZ on Sunday, February 9, 2020.

Officer Cisneros and Officer Montoya from the El Paso Police Department have been here since Monday and have been posted at the mortuary from 9:00 a.m. until midnight each day. An Arizona DPS trooper has been keeping watch overnight.

Arizona DPS Troopers at the scene of the crash discovered that Allbee was affiliated with the El Paso Police Department when they ran a check on the plates of the vehicle he was driving. Once they confirmed that he was a police detective, state and local law enforcement has assisted the El Paso Police Department keep a 24-hour watch over Allbee until he can be flown back to El Paso for burial.

Texas State Troopers will arrive at the Safford airport on Friday, February 14 to fly Allbee back to El Paso. Officers Cisneros and Montoya will escort the body to the airport as part of the procession from the mortuary to the airport at 2:00 p.m. Another officer will accompany Allbee during the flight to El Paso. Allbee was also a retiree of the Texas National Guard.

Detective Allbee’s wife was a passenger in the vehicle and was flown to Tucson for treatment following the accident. She is expected to be discharged in the near future.