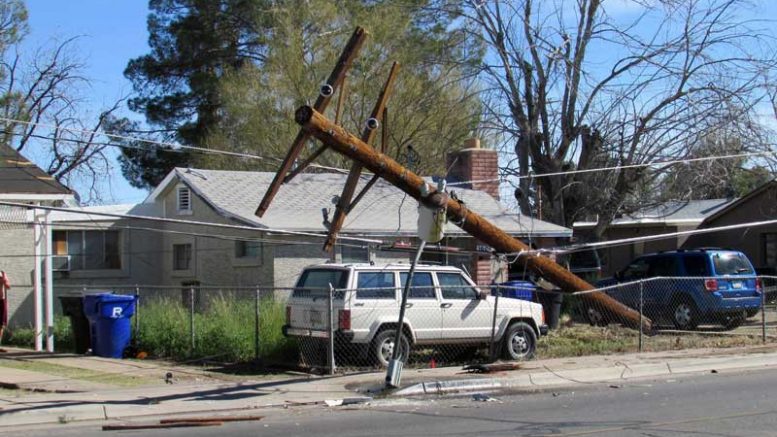 Contributed Photo/Courtesy Ed Ragland: A utility pole was knocked over after being struck by a hit-and-run driver Feb. 8. The driver, alleged to be Brady Huffman, was already wanted for multiple warrants. Huffman was taken into custody Friday.

SAFFORD – An alleged hit-and-run driver who was sought by police was apprehended at gunpoint March 10 after he was found hiding in a bush.

Brady Lynn Huffman, 30, of Thatcher, was arrested on two felony warrants and one misdemeanor warrant. A personal quantity of marijuana and some apparent narcotic pills were also discovered in his possession.

Officers had been looking for Huffman since Feb. 8, when he allegedly fled the scene after crashing a van through a utility pole in the area of 8th Avenue and Kings Court. The van ended up resting in the yard of a residence at 1701 S. 8th Avenue with substantial front-end damage. The utility pole was found broken in two, falling on a chainlink fence at a residence at 1607 S. 8th Ave. The electricity was down in the immediate area for about an hour as crews repaired it.

At that time, the passenger in the van, Donna Mary Benson, 22, of Safford, advised she and Huffman had smoked methamphetamine at a friend’s house roughly two hours prior to the crash. After colliding with the utility pole, Huffman fled the scene and could not be found until Friday. 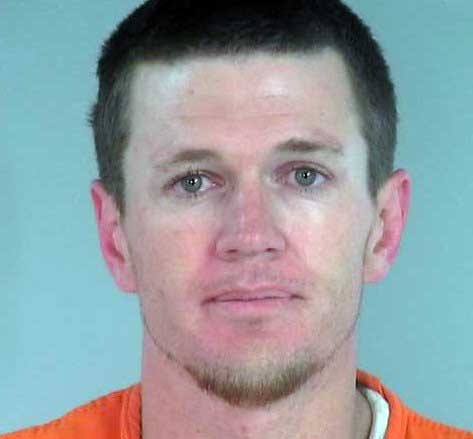 Contributed Photo/Courtesy GCSO: Brady Lynn Huffman was captured while hiding in some bushes. A container with marijuana and apparent narcotic pills was found in his pants pocket, which he said was placed there by his girlfriend’s mother.

Huffman already had two outstanding arrests since January; one stemming from a guilty charge of trafficking in stolen property with a petition to revoke his probation, and the second stemming from a guilty charge of burglary in the second degree with another petition to revoke his probation. He was also found guilty in 2013 for possession of a dangerous drug. After the February incident, a new warrant for his arrest was issued after he was charged in Safford Municipal Court with criminal damage and failing to notify when striking a fixture on a highway.

On Friday, police received a tip that Huffman was at a residence at 407 W. 3rd St. and was going to be leaving soon. An officer responded to the area and conducted surveillance while waiting for Huffman to exit the residence.

While observing the property, the officer noticed a man who appeared to be Huffman leave and then begin to run from him. Huffman ran through a few yards and a canal but was later found hiding in some bushes.

During a search of his person, the officer found a small, silver container in Huffman’s pocket that had a couple packages of marijuana, a couple of blue pills and a folded up piece of tin foil. Water from the canal had seeped into the container, however, and washed off the markings on the pills so they could not be identified. They were sent to the Arizona Department of Public Safety laboratory to be tested.

Huffman allegedly denied the drugs were his and that his girlfriend’s mother put the container in his pocket. He said she told him that the police were on the way and told him to run. Huffman was also found to have a straw with apparent drug residue as well.

During his interaction with the officer, Huffman complained of having an asthma attack. He was subsequently taken to Mt. Graham Regional Medial Center, where he was treated and released with a prescription for an inhaler. He was then transported to the Graham County Jail and booked on his warrants. Additional charges are pending lab test results.