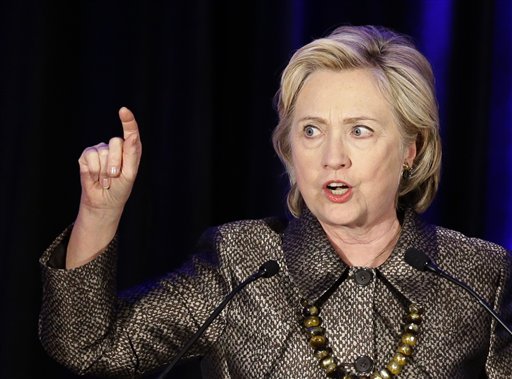 In this Dec. 14, 2015, photo, Democratic presidential candidate Hillary Clinton speaks during the 2015 National Immigration Integration Conference in New York. Clinton is unveiling her plan to strengthen the nations defenses against terrorism with a speech in Minnesota on Dec. 15, a state that has wrestled with terrorism recruiting for years. (AP Photo/Seth Wenig)

MINNEAPOLIS (AP) — Democratic presidential front-runner Hillary Clinton says the American people “cannot give in to fear” — a message she is touting as part of her strategy for homeland security and preventing a domestic terrorist attack.

Speaking Tuesday at the University of Minnesota, Clinton attacked Republican rivals, saying that promises by GOP candidates “to carpet bomb until the desert blows” sound “in over your head.”

“Shallow slogans don’t add up to a strategy,” she said.

Clinton sought to reassure Americans that she would keep them safe following attacks in Paris and San Bernardino, California, incidents that have thrust terrorism to the forefront of the presidential campaign.