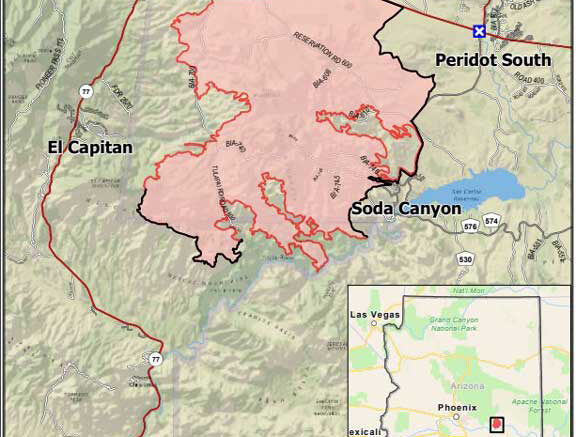 SAN CARLOS — Thanks to containment lines on the Mescal fire put in place by wildland firefighters, all forms of traffic may once again travel on U.S. Highway 70 between Safford and Globe.

The roadway was re-opened to commercial and semi traffic at 8 a.m. Wednesday.

According to the Wednesday update, the Mescal fire is at 70,066 acres and is 33-percent contained. A spot fire Tuesday consumed about 2,400 acres, and forced the evacuations of Beverly Hills and T-11 Ranch on the San Carlos Apache Reservation before firefighters were able suppress the flames.

About 150 residents of Soda Canyon and Coyote Flat were allowed to return to their homes, after those areas were removed from the mandatory evacuation list.

As of Wednesday morning, the Telegraph fire, just west of the Mescal fire, is at 80,822 acres and is 21-percent contained.

The focus Wednesday will be on securing the U.S. Highway 60 corridor, with the goal of re-opening the roadway to traffic. It is currently closed between Superior and Globe.

The Hobo fire in Greenlee County has grown to 350 acres and remains at 0-percent containment.

The current strategy is to confine fire spread and protect four cabins in remote locations.