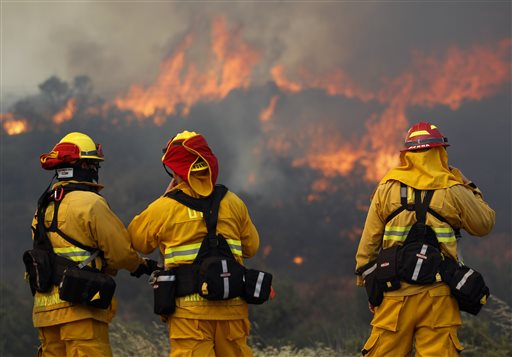 Firefighters made some progress against a blaze putting hundreds of homes and popular seaside campgrounds near Santa Barbara at risk when overnight winds pushed flames into previously burned areas. But officials warned of high heat, low humidity and gusty winds through Tuesday for the rugged coastal slopes.

The blaze was more than halfway contained after burning more than 12 square miles since Wednesday, but 270 structures are still threatened.

Another wildfire was growing near a small town in the California desert close to the Mexico border. It surged to nearly 3 square miles amid triple-digit temperatures and forced the evacuation of about 75 people from Potrero, a ranching community a few miles north of Tecate, Mexico, and about 40 miles southeast of San Diego.

Three firefighters suffered heat-related injuries and were taken to a hospital for evaluations.

In central New Mexico, a 28-square-mile fire that erupted last week and destroyed 24 homes in the Manzano Mountains south of Albuquerque was largely uncontained. But higher humidity overnight allowed crews to strengthen lines around the fire and keep a lookout for hot spots where flames could jump the line.

In eastern Arizona, a fire doubled to nearly 42 square miles and led officials to warn a community of 300 residents to prepare to evacuate. But the blaze on the Fort Apache Indian Reservation southwest of Show Low was not moving quickly toward the community of Cedar Creek because of sparse vegetation and shifting winds.

In California, a small-but-dangerous brush fire on Sunday threatened a hilly, densely populated neighborhood near downtown Los Angeles before getting knocked down. The flames damaged two homes, scorched yards and sent trees up in flames.

Neighbors scrambled with garden hoses and buckets, while water-dropping helicopters and scores of firefighters chased embers and doused steep hillsides to keep the flames from spreading.

Paul Gaffner had been swimming at a pool a few minutes from his home and was planning to run errands when he saw heavy smoke near his house.

“Man, that fire is at my house,” he said he thought.

When he arrived, his neighbor was hosing down flames in his backyard. In his flip-flops and shorts, he joined the fight as neighbors chipped in help protect their houses.

“It was a lot going on,” Gaffner said as he handed out bottles of Gatorade to firefighters. “You’ve got it in front of you, you don’t have time to panic.”