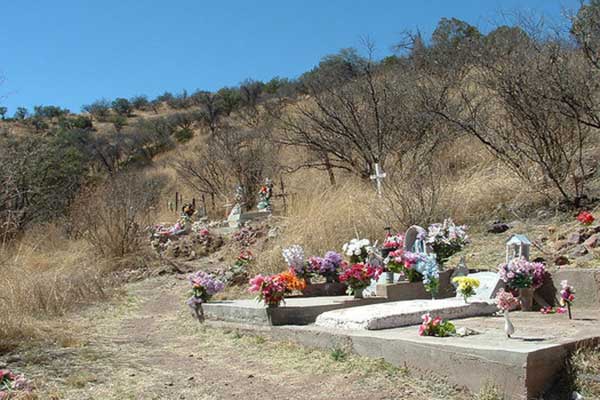 The Harshaw cemetery in southern Arizona is one of just three places where Patagonia eyed silkmoths are found. (Dedhed1950/Flickr)

Ariz. – A rare, orange-colored moth is the center of a new legal fight in Arizona.

Three groups have filed a 60-day notice of intent to sue the U.S. Fish and Wildlife Service over concerns about the Patagonia eyed silkmoth.

The moth is only known to live in one small ghost town cemetery in southern Arizona and a few isolated areas in northern Mexico.

Its tiny range is part of the reason environmental groups think the moth deserves protection under the Endangered Species Act.

“By designating critical habitat, or designating the moth endangered or threatened, we would be able to put protections into place that would allow them to recover and to be able to repopulate areas of habitat,” explains Lindsay Dofelmier, a legal fellow with Defenders of Wildlife, one of the groups behind the lawsuit.

Dofelmier’s group petitioned the Fish and Wildlife Service in 2015 to list the moth as endangered, but the agency found the petition did not present substantial information to warrant action.

Even though there aren’t many Patagonia eyed silkmoths left, Dofelmier says the insects shouldn’t be abandoned.

Defenders of Wildlife maintains the moth survived in the ghost town cemetery only because the graveyard is surrounded by a livestock barrier that has prevented grazing.

Defenders of Wildlife says just one forest fire potentially could eradicate the species.