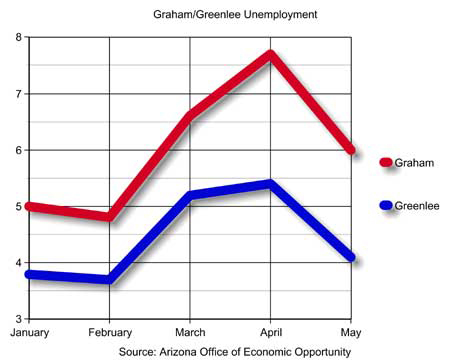 PHOENIX — While the rest of the state dealt with the economic impact of COVID-19, May saw a return to close to normal for Graham and Greenlee counties when it comes to employment.

According to data released Thursday by the Arizona Commerce Authority, Greenlee County had an unemployment rate of just 4.1 percent in May, by far the lowest unemployment in the state.

It was a 1.3 point drop from April’s unemployment rate of 5.4 percent and in line with the 3.8 and 3.7 percent Greenlee recorded in January and February, respectively.

La Paz County was also at 6.0 percent unemployment in May.

Statewide, unemployment is at 8.9 percent, down 5.5 points from April but still way ahead of the 4.8 percent unemployment rate in May 2019. The national rate was 13.3 percent.

Two economic sectors posted gains in jobs in May —construction (up 1,500 jobs) and financial activities (up 1,000)