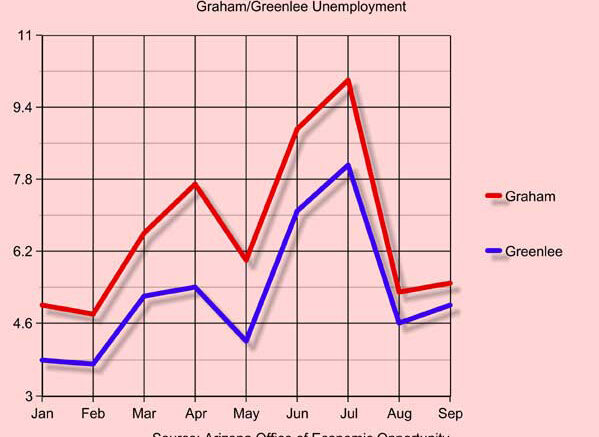 PHOENIX — The unemployment rollercoaster continues in Graham and Greenlee counties; however, this latest uptick wasn’t as severe as in previous months.

Jobless claims in both counties saw a slight increase in September.

Graham County is at 5.5 percent unemployment in September, up just 0.2 points from August’s 5.3 percent.

Those numbers put Greenlee and Graham as the two counties with the lowest unemployment in the state, followed by Cochise and Yavapai counties both at 5.7 percent..

Six economic sectors reported job gains in September: leisure and hospitality (up 7,000); trade, transportation and utilities (up 4,900); professional and business services (up 4,500); education and health services (up 2,000 jobs); financial activities (up 600); and information (up 200).

Construction showed no job losses or gains in September.