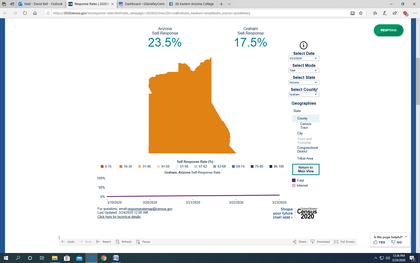 THATCHER – Graham County is the middle of the pack statewide, while Greenlee County is in the bottom group when it comes to responding to the U.S. Census.

Nebraska leads the nation with a 30.2-percent self response rate, while West Virginia is the low with 16 percent.

Face-to-face gathering of census data was to begin in mid-May; however, following the social distancing guidelines laid out by the CDC for the COVID-19 pandemic, a new timeline for home visits to those who have not completed a census has not yet be announced.