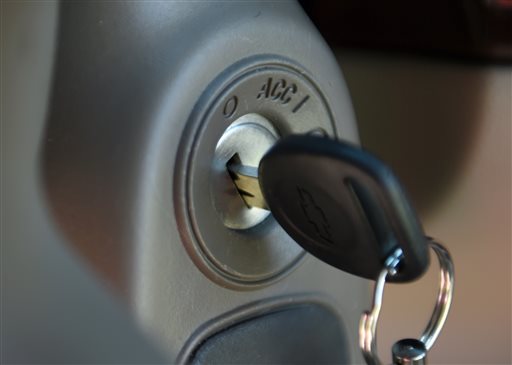 FILE - This April 1, 2014, file photo shows a key in the ignition switch of a 2005 Chevrolet Cobalt in Alexandria, Va. Federal prosecutors have reached agreement with General Motors to resolve a criminal investigation into how the Detroit automaker broke the law by concealing a deadly problem with small-car ignition switches, multiple people briefed on the case said Wednesday, Sept. 16, 2015. (AP Photo/Molly Riley, File)

The agreement calls for two charges — wire fraud and scheming to conceal information from government regulators — to be dropped after three years if the automaker cooperates fully. However, U.S. Attorney Preet Bharara did not rule out the possibility employees could still face charges.

Also Thursday, GM announced it that it will spend $575 million to settle many of the civil lawsuits filed over the scandal.

The twin agreements bring to more than $5.3 billion the amount GM has spent on a problem prosecutors say could have been fixed at a cost of less than a dollar per car. Those expenses include government fines, compensation for victims and the recall and repair of the millions of affected vehicles.

The statement of facts to which the company agreed in its deal with prosecutors describes in scathing terms GM’s deceitful and dismissive approach to handling a problem that was evident even before the defective switch went into production in 2002.

“GM killed over a 100 people by knowingly putting a defective ignition switch into over 1 million vehicles,” Ditlow said. “Today, thanks to its lobbyists, GM officials walk off scot-free while its customers are 6 feet under.”

Bharara said he understands some victims’ families might be disappointed no individuals were arrested, but he added: “We apply the laws as we find them, not the way we wish they might be.” He also GM was given credit for cooperating with the investigation, including sharing the results of its in-house probe.

As part of GM’s deal with prosecutors, an independent monitor will be appointed to review the automaker’s procedures for handling of safety defects.

When GM employees, the media and some customers complained about the switch in 2004 and 2005, the company’s engineers left the switch alone, rejecting a cheap and simple improvement that would have significantly reduced the problem, court papers said.

Court papers said even though the dangers became plain in the spring of 2012, the company did not correct its earlier assurance that the switch posed no safety concern.

Instead, Bharara wrote in court papers, it concealed the defect from regulators and the public “so that the company could buy time to package, present, explain and manage the issue.”

The wire fraud count pertained to the company’s false assurances to customers over the Internet in 2012 and 2013 of the safety of used cars they were purchasing, court papers said.

The faulty switches can unexpectedly slip out of the “run” position to “off” or accessory. That shuts off the engine and disables power-assisted steering, power brakes and the air bags.

Last year, GM also established a fund to compensate victims. Lawyers administering the fund accepted 124 death claims and 275 injury claims. Families of those who died will get at least $1 million. GM has set aside $625 million to compensate people who accept a settlement with the fund.

Texas attorney Bob Hilliard represented 1,385 plaintiffs with death or injury claims who decided not to seek compensation from the fund. On Thursday, GM said it has agreed to spend part of $575 million to settle those lawsuits, which include 45 deaths.

The money also will be used to settle a shareholder lawsuit that said the concealment of the problem reduced the value of GM’s stock.

GM was the world’s top-selling automaker for seven decades before being overtaken by Toyota in 2008. During the first half of this year, GM slipped to third place in global sales as Volkswagen edged Toyota out of first place.

The company acknowledged that some of its employees knew about the problem for more than a decade, but no cars were recalled until early last year. GM hired former federal prosecutor Anton Valukas to investigate the matter, and he found no deliberate cover-up on the part of top executives. Instead, he blamed the problem on a bureaucratic corporate culture that hid problems and failed to take action.

After the Valukas report was released, GM fired 15 employees, including engineers and lawyers, for failing to act to resolve the switch problem.

The recalls led to other changes at GM. CEO Mary Barra appointed a new safety chief who reports directly to her and added 35 product safety investigators to its staff. The company changed its product development process to focus more on safety. And it started a program that encourages employees to speak up if they uncover a safety concern.

GM also reviewed a backlog of safety issues in 2014 and ordered a record 84 recalls covering more than 30 million vehicles, including 27 million in the U.S. By comparison, this year it has issued 33 recalls covering 2.6 million cars and trucks.

Numerous critics complained that no individuals faced charges, including Laura Christian, the mother of a woman who died in her 2005 Cobalt. She said she felt like she was in mourning again and called the financial penalty a “slap on the wrist.”

In May 2014, the National Highway Traffic Safety Administration, an agency required to be notified about safety defects, levied a record civil penalty of $35 million against GM for failing to notify the government of a safety-related defect within five days of learning about it.

The deal with GM comes roughly a year and a half after Toyota agreed to a $1.2 billion penalty from the Justice Department, admitting it hid information about defects that caused Toyota and Lexus vehicles to accelerate unexpectedly. The problem resulted in injuries and deaths.

AP Writers Larry Neumeister in New York, Eric Tucker in Washington and Dee-Ann Durbin in Detroit contributed to this report.