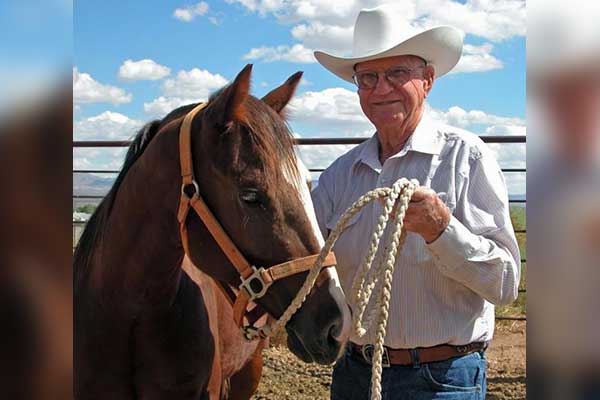 Garth was born March 3rd, 1918 in his parents’ home near Duncan, Arizona. He was Edward and Lettie Lunt’s fourth child. His brothers and sisters included Dorah, Almeda, Arcel, Waldon, Jack, Elda, and Betty. He married a beautiful girl by the name of Olive Hardy on April 26, 1941. They were married by Stake President, Spencer W. Kimball in Thatcher, Arizona and were together for 60 years until Olive’s passing in 2001. In 2009, Garth married Virginia “Ginger” Willis Richins.

Garth loved the ranch life. He especially loved round-ups, branding, sleeping under the stars, Dutch oven cooking and riding horses. He was one of the greatest storytellers in the world if he could find someone who had two or three hours to spare. Garth worked for the Spear Ranch and later owned his own spread called the Arroyo Seco Ranch near Stockton Pass. He also served his community as a deputy sheriff and chief of the Pima Police Department.

Funeral services for Garth will be conducted Saturday afternoon, December 1, 2018, at 2:00 p.m., at The Church of Jesus Christ of Latter-day Saints Pima Stake Center by Bishop Than Ashby of the Pima Third Ward. Concluding services will follow in the Pima Cemetery.