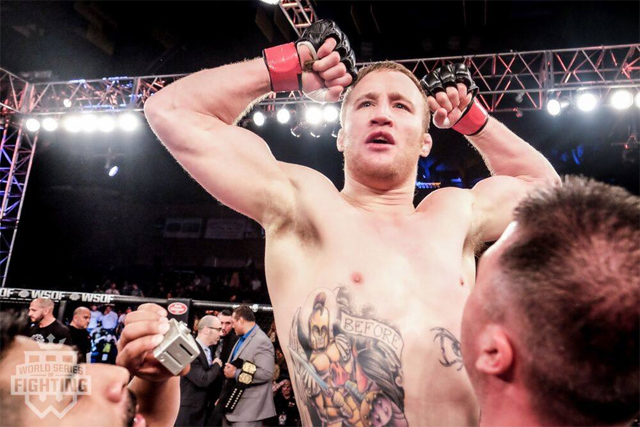 Safford native Justin Gaethje casually drove through his Colorado neighborhood on Sunday on his way for his prefight doctors appointments for UFC 249. You would of never known he was getting ready for the biggest fight of his professional MMA career by his tone. Low key and confident, he spoke with GilaValleyCentral about his Interim Lightweight Title bout on May 9th against Tony Ferguson.

“I’ve been preparing my whole life for this,” said Gaethje. “This will be the biggest show in the world Saturday and I’m ready.”

The UFC will try and pull off the first live sporting event since March 13th when the COVID-19 pandemic shut down the sports world. There will be no fans allowed in the arena in Jacksonville but that doesn’t bother Gaethje.

“It probably sucks more for the fans than it does for us,” he said. “Once the door locks behind me, it’s a fight for my life. I don’t see the fans anyways.”

Dana White originally tried to book this fight for April 18th but couldn’t ultimately find a venue that would host it and the event was called off. Gaethje took the fight on short notice, which is something he hadn’t ever done. But has he put it “no one had ever offered me a title fight on short notice.”

April 18th came and went with no fight and that left the fighters in limbo as to when or if the fight would ever happen but Gaethje stayed in the gym training to be ready for the chance.

“I reminded myself that when I was growing up wrestling, I would show up to events and not know who I was wrestling. I took that mentality into my training and it really helped,” he said.

Tony Ferguson is riding a 12 fight winning streak that spans 8 years. That isn’t something The Highlight takes lightly. “He’s special,” said Gaethje. “He’s also awkward. He throws punches and kicks at angles that not everybody can. I’ll have to figure that out quickly,” he added.

An interesting side note to the UFC Main Event and Co-Main Event is that three of the four fighters grew up in Arizona. Obviously Gaethje in Safford, Henry Cejudo in Phoenix and Dominick Cruz in Tucson. If you throw in Tony Ferguson from Southern California, the Southwest is well represented.

“Growing up you hear of the all of the outstanding wrestlers in the Midwest,” said Gaethje. “But none of them have that Latino blood running through their veins, all of us do.”

I’m not sure if it’s Latino blood or ice water but when that cage shuts on Saturday we are all in for a show.

The Main Card will be available on ESPN+ PPV and starts at 7pm Arizona time.