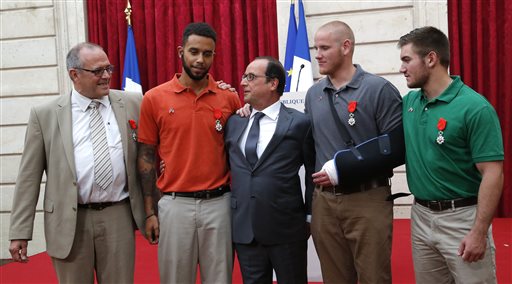 From the left, British businessman Chris Norman, Anthony Sadler, a senior at Sacramento State University in California, French President Francois Hollande, U.S. Airman Spencer Stone, and Alek Skarlatos a U.S. National Guardsman from Roseburg, Ore., pose at the Elysee Palace, Monday, Aug. 24, 2015 in Paris, France. Hollande pinned the Legion of Honor medal on Stone, Skarlatos and Sadler, three long-time friends who subdued a gunman on Friday, Aug. 21, as he moved through a speeding train with an assault rifle strapped to his bare chest. Norman also jumped into the fray. (AP Photo/Michel Euler, Pool)

PARIS (AP) — Mark Moogalian and his wife were seated facing each other on the high-speed train when he suddenly told her, “Get out, this is serious.” Then, Isabelle Risacher Moogalian said, she ducked behind some seats as he lunged to grab the assault rifle from the gunman’s hands.

“When my husband collapsed, I saw across the seats. He looked at me and he said ‘I’m hit, I’m hit.’ He thought it was over and he was going to die,” she told Europe-1 radio. The bullet struck him in the back and exited through the neck.

The American teacher and artist who has lived in France for more than two decades has emerged as another hero in the high-speed train attack thwarted by a group of quick-thinking men. According to French President Francois Hollande, a Frenchman was the first to encounter the gunman as he left the toilet, alerting others in the area. That person, Hollande said, wished to remain anonymous.

Moogalian remained hospitalized Tuesday in the northern city of Lille, and his sister in Virginia said his role in trying to stop what French authorities are calling a terror attack was in character.

“Mark would give anything for anybody,” Julia Allen told NBC News. “He’s just that kind of person.”

Risacher said U.S. Airman Spencer Stone came across the wounded Moogalian and stanched the bleeding by holding his finger on the wound until paramedics could take over.

Moogalian runs a language school from a houseboat on the outskirts of Paris, according to the school’s website. Music and art are clearly his passions, as his personal website attests, with its range of sculpture, paintings, photos and downloads of music he performs in a duo with his wife. In the couple’s biography, they describe themselves as “largely bicultural, bringing the best of both worlds.”

Harry Moogalian, a cousin in Richmond, Virginia, described him as a “free spirit” who tends to avoid the limelight and has loved music since childhood. The Virginia man, who hasn’t seen his cousin in a decade, spoke admiringly of his actions.

“I think he’s very brave for doing that. I don’t know how I would react or anybody would react in that situation, but it seems like he reacted the right way,” Harry Moogalian said.

“My husband is among the heroes of this story, and he nearly paid with his life, because just a few millimeters closer and the bullet would have sliced his carotid in exiting,” Risacher said.

Moogalian and the Frenchman will receive the Legion of Honor, as did Stone, U.S. Army Spc. Alek Skarlatos, their friend Anthony Sadler and British businessman Chris Norman.