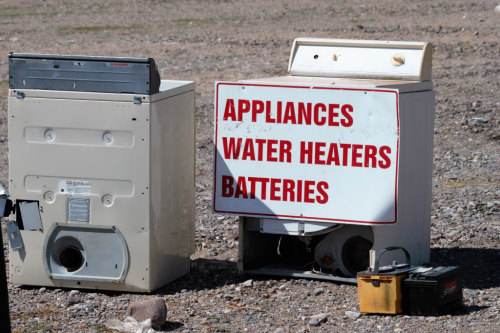 Jon Johnson Photo/Gila Valley Central: Due to debris from the unprecedented storm Saturday night, the city of Safford has extended its free, unlimited bulk trash pickup for its residents for an extra week.

SAFFORD – Due to the amount of leaves and other debris deposited throughout Safford due to the freak hail storm late Saturday night, the city of Safford has decided to extend its free, unlimited bulk trash pickup for an extra week.

City Manager Horatio Skeete informed the council at its Monday night meeting of the decision to extend the pickup. The big bulk pickup was originally expected to end Oct. 14 but will now be extended to Oct. 21.

“I met with staff this afternoon, and, due to the unprecedented event this weekend, we are going to extend the bulk pickup throughout the city for at least another week to accommodate all the cleanup work that has to be done as a result of the storm,” Skeete said. “Even in the areas that have been covered once over, we will go back and clean that area over the next two weeks.”

The storm not only brought up to 6 inches of rain in some parts of Safford in mere hours but also dumped a previously unheard of amount of hail up to 2 inches in size. The hail pounded trees and other fauna, causing leaves and other debris to be washed through town as streets became streams. 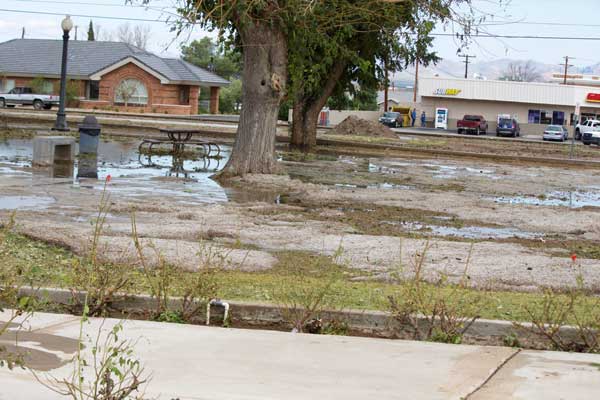 Jon Johnson Photo/Gila Valley Central: The Safford City Annex – while cleaned up now – had a large amount of debris from the storm.

To have items removed, Safford residents must simply drag them to the curb and call the city at 432-4202 to inform the sanitation department of the need to pick up the items. Any item that is accepted at the Safford Regional Landfill, including appliances, will be picked up by city sanitation staff.

The city normally offers a free bulk pickup once a week for residents – mostly for tree trimmings and that sort of thing – but it is limited to four cubic yards or less and no all landfill-accepted items are included. The city originally decided on offering the free bulk pickup in an effort to alleviate an anticipated increase of users taking advantage of the free dump week from Oct. 15-22, which is open to all county residents. This year, however, users will be allowed only one free load.

“We’re hoping that our effort within the city limits will minimize city of Safford residents from accessing the landfill,” Safford Utilities Director Jenny Howard said.

For more information on the big bulk pickup or to request assistance call the city of Safford Utilities Department at 432-4173.