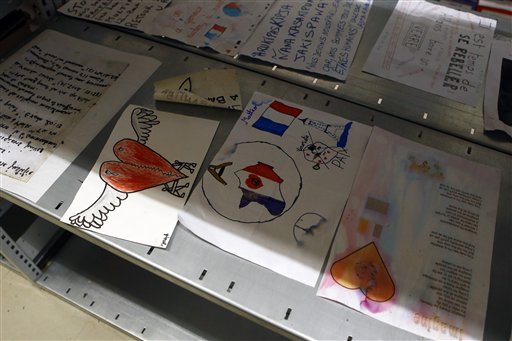 Drawing and notes with the colors of French National Flag are displayed to dry on shelves at the City of Paris archive center during a presentation to the press in Paris, France, Tuesday, Dec.15, 2015. The city of Paris has decided to collect and archive the notes and drawings left by passers-by on informal memorials on the sites of the Nov. 13 attacks, to keep the memory of the moving and spontaneous show of solidarity toward the victims. (AP Photo/Francois Mori)

PARIS (AP) — The city of Paris has decided to collect and archive the notes, poems and drawings left by passers-by on informal memorials at the sites of the Nov. 13 attacks, to keep the memory intact of the moving and spontaneous show of solidarity and compassion toward the victims.

The decision was made the week following the attacks that left 130 people dead, the director of the Archives of Paris, Guillaume Nahon, said Tuesday.

City teams this month have been carefully gathering the pieces of paper damaged by rain. They have also removed faded flowers and consumed candles and have taken photos of the changing memorials.

“We’re trying to combine two objectives: to maintain these memorials during the time of grief and at the same time, to save the tribute notes,” Nahon said.

Every day, new messages are left by passers-by, including lots of children drawings.

Hundreds of them are now drying out in the rooms of the Archives of Paris. They will be treated against mold and scanned in order to be available to scientists as well as the public on a future website.

“To Justine, a young girl full of life (…) I will keep in memory these moments of joy and adventure I’ve spent with you in Santiago de Chile,” one letter says, written on a schoolbook page.

Other messages celebrated Paris’ lifestyle and used the Eiffel tower or French flag as symbols of peace.

Archivist Mathilde Pintault said “it is important to keep track of the amount of tributes that have been left and the diversity of these tributes, some from children, from older people, from relatives of the victims, from anonymous people.”

Archivist Audrey Ceselli told the AP she works with a “sense of urgency” but tries not to read the highly emotional notes in order to be able to do her job.

“To go there is difficult for us, as Parisians … we are paying attention to the notes because they are fragile, but we don’t focus on the substance for now,” she said.

The operation is a first for the Archives of Paris. Most of the tributes left following the January attack against satirical newspaper Charlie Hebdo have been lost. The city is now trying to gather some photos taken at the time.

Raphaelle Fontaine, 22 year-old student from southwest of France visiting Paris for a few days, felt the need to come to the Bataclan concert hall, the site of the deadliest attack on Nov. 13, to light a candle.

“It would have been even sadder to throw all these messages away. They are part of Paris’ history. To me it’s a way to keep the victims’ memory alive,” she said.