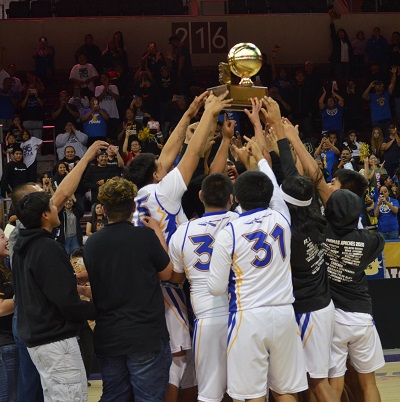 PRESCOTT VALLEY — It was a journey that started in middle school and it all culminated with Fort Thomas’ first boys basketball championship since 2005. This year’s senior class has been playing together since 5th grade.

The Apaches led the entire game against North Valley Christian Academy. A combination of the 2-3 zone on defense and the aggressiveness of guards Brad Johnson, Malachi Rogers and Skylar Kindelay were the difference in the game.

Fort Thomas looked to drive to the basket instead of settling for their traditional three point shots. The Apaches made only 5 three pointers in the game.

The Lions trailed by double digits nearly the whole game except for in the middle of third quarter when Breagan Patton hit three 3-pointers in a row to cut the lead to 9. Kindelay then answered with 6 straight for Fort Thomas to extend the lead back to 15 before he fouled out.

Jaden Preston was the beneficiary of the wizardry of Johnson in the 4th quarter as he put in six points to help put the game out of reach.

Kindelay led the Apaches with 16 points. Rogers added 11 and Johnson had 10. Big man Latrell Titla had 9 points but a monumental 19 rebounds.

The win was a little extra special for this year’s team because the 1995 Fort Thomas Championship team was in attendance to watch. They were recognized at halftime as part of the AIA 25 year anniversary series.